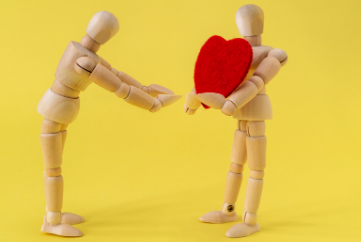 UPDATED June 2, 2022 (originally published February 15, 2017)—Think you find potential romantic partners attractive solely because of the way they look? Not so! The kind of compliments they pay you–and at what point they pay these compliments in your monthly cycle–can actually play a key role in how attractive you perceive them to be.

That’s the news from 2017 study in the journal Scientific Reports that showed photos of male faces to 124 heterosexual women throughout their monthly cycle along with text paying compliments using two different language styles1 :

And they included compliments that had two distinct targets:

The type of compliments women prefer–and when

According to the results of the study, women prefer specific types of compliments–and these preferences are impacted by where they are in their monthly cycles as well as their relationship status. Here’s what the researchers found:

What’s behind these results?

So, what makes women prefer certain compliments at certain times in their cycle based on their relationship status? Let’s break it down by finding:

First, women prefer metaphors over literal compliments because coming up with complex images is a sign of higher intelligence and creativity, which can indicate better genes. It also explains why so many poets, musicians and other artistically-inclined folks are often flocked by adoring female fans.

Women tend to prefer compliments paid about their appearance over something they own because it often denotes that the person making the compliment has a romantic interest rather than just a platonic, friendly one.

As for women in relationships preferring compliments about their appearance in their fertile phase, the study authors point out that when women are in relationships, they get a biological urge during ovulation to take another look around the dating pool to see if there’s someone else with stronger genes with whom to mate than their current partner. As a result, women who are hitched are more receptive to compliments about their appearance from others since it may lead to pairing up with someone who can give them healthier offspring than their current mate.

The researchers weren’t sure what to make of single women who prefer compliments about their appearance during the two weeks leading up to their period. My personal hunch is that it’s because on these days women feel more self-conscious about their appearance due to lower estrogen reducing their self-confidence and higher progesterone triggering water retention and constipation, making them feel a little heavier. So, compliments about appearance may serve to boost their mood by countering this dip in confidence.

As a side note, this study revealed something interesting about female behavior: Turns out, women in relationships are faster at detecting when someone is flirting with them than single women. In fact, the study found that single women are pretty lousy at sensing when someone was showing romantic interest all cycle long.

Whether this means that women in relationships are hitched because they’re better at recognizing flirtations than single women or they develop this heightened sense after settling down is not yet known.