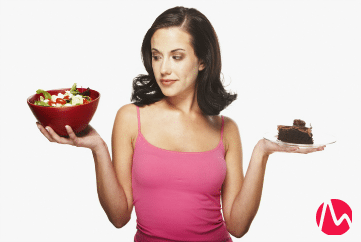 25 May Willpower problems? The hormone connection

Frustrated that, despite promises you’ve made to yourself, you sometimes still find it difficult to stick to good-for-you goals? For example, instead of opting for a fruit salad, you eat a slice of cake. Instead of keeping your cash in your pocket, you buy a cute pair of earrings. Instead of going for a jog, you order up a movie on Netflix.

It’s not your fault. Truth is, your willpower is stronger on some days of your monthly cycle and weaker on others.

How willpower varies across your monthly cycle

According to research, you have more willpower in most of the first half of your cycle–after your period and in the days leading up to and including ovulation.(1,2,3)

And you have less willpower during the second half of your cycle–especially your premenstrual week.

Some researchers believe it comes primarily down to two key factors: Mental fatigue and mood.

When you’re mentally alert and upbeat, you’re better able to resist temptation. And it just so happens that during the first half of your cycle after your period days, high-and-rising estrogen is revving brain energy and positivity.

When you’re tired and down, you’re less able to resist temptation. And during the second half of your cycle, lower estrogen and sedating progesterone are triggering brain fatigue along with a bit more negativity.

Whether you want to rev your resolve even more in the first half of your cycle (say, to train for a marathon) or you want help shoring up self-control in the second half of your cycle, there are study-proven ways to get more willpower when you need it:

1. Visit nature: A study in the Journal of Environmental Psychology shows that just a few minutes of being exposed to nature–for instance, in a park, at a beach or by a lake–replenishes willpower by revving energy and mood.(4)

2. Look at a photo of snow: Sounds too silly to work, but a study in the journal Psychological Research reveals that viewing a cold scene triggers more “cognitive control”–the ability to choose the option with the long-term gain rather than the immediate short-term reward–by sending a message to your brain to be more cool-headed and restrained about your decision.(5)

3. Say “thanks”: When temptation strikes, summon feelings of gratitude by focusing on something you appreciate. Thankfulness switches you from a gotta-have-it-now immediate rewards mindset to one where you value long-term goals, such as saving money or being healthy, according to research in the journal Psychological Science.(6)

4. Make a fist: When you think you’re going to give in to the choice that will have you feeling regret, clench your fist, jaw or other muscle and hold it. Tensing a muscle is a physical act of willpower that sends a message to the brain to amp up its self-control, reveals a study in the Journal of Consumer Research. But, be sure you do your muscle clenching at the time that you’re making your decision–not before. Study participants who clenched ahead of making a choice actually depleted their willpower by the time they picked their option. So, put off flexing till you really mean it.(7)