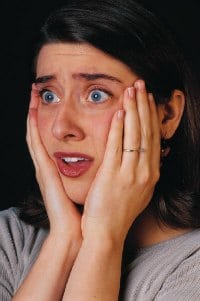 Posted at 09:01h in General by Gabrielle Lichterman
0 Likes 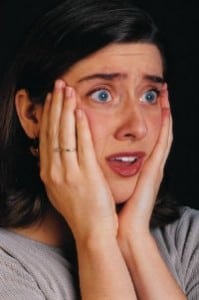 Yesterday, someone told me he was so grossed out by someone else touching his food that he didn’t even like it when, while sharing dessert with his wife, her fork touched his side of the cake.

This was funny to me considering the fact that the saliva coating fork tines isn’t any different from what you’d come in contact with during a passionate kiss. And is certainly one of the more benign body fluids a couple can swap.

Anyway, this got me to thinking about disgust and sex, in general. So, I did a little looking around and found two interesting studies–including one that ties these topics to our monthly menstrual cycle.

Researchers speculate that this increased sensitivity to sexual disgust helps boost your chance of pregnancy during this fertile phase of your cycle by helping you avoid stuff that can hamper conception. Like sexual positions that won’t get his sperm anywhere near your egg.

But, like with most things, that’s not the whole story.

A more recent study conducted in 2013 from the University of Groningen in the Netherlands shows that once you’re sexually aroused, that ovulation-triggered sense of disgust wanes, making you more likely to do or watch the thing that would have normally grossed you out.

And you really gotta hand it to the female study participants who volunteered to help the researchers figure this out. Boy, were they ever up for a challenge:

That’s when the researchers discovered that women who became aroused from the sex film were less disgusted by the gross tasks and more willing to do them.

This sexual arousal also led them to do other revolting stuff not related to sex, like drinking water from a glass that had a bug in it (they weren’t told the bug was plastic), handle used toilet paper (which was actually smeared with brown-colored food, but still, yuck) and some other tasks that, honestly, are so revolting, I can’t in good conscience leave those images implanted in your head all day. (But, I bet you think twice next time you consider signing up to be a study volunteer.)

Since I like to see some teachable moment in all of the studies I share, I’m trying to look a useful take-away here. Not gonna lie though–this one’s a toughie.

Maybe it’s that if you’re going to try something seriously kinky in the boudoir that’s totally out of your comfort zone (inspired by Japanese anime, for instance) or something really ewwy outside the bedroom (like entering a gross-out contest), you should warm up first with some kind of sex play or erotica you find stimulating.