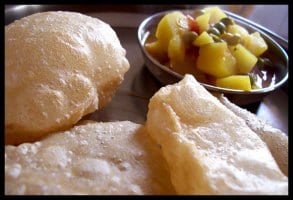 I remember my first date with my husband: It was at one of my favorite Indian restaurants–Mitali in the East Village of Manhattan. I ordered about five different dishes that I would normally hoover in an instant because they’re so delicious. But, on that date, I barely touched a thing. My appetite just evaporated.

I chalked up my inability to eat to first-date jitters and made a mental note that future first dates probably shouldn’t happen at restaurants. (Little did I know that would be my last first date ever.)

I’m thinking of this event now because first dates aren’t the only time our appetites vanish. Research shows that there’s a certain time in our cycle when we tend to eat significantly less: It’s the days leading up to and including ovulation.

The primary reason is high estrogen, which has an appetite-suppressing effect.

However, researchers have pressed further to find out why our peaking hormone has us eschewing–rather than chewing–our food during our fertile phase. In other words, what is the evolutionary reason our body doesn’t want us to eat? What purpose does it serve?

One researcher reporting in the Quarterly Review of Biology theorizes that eating less gives us more time to devote to seeking out and bedding a mate in time for ovulation. (full text) Oh sure, nowadays we have microwave meals ready in seconds. But way back before Hot Pockets, women had to actually forage for their food, which could really take a big chunk of time out of their day.

Adding to this, three experiments conducted for a 2015 study in the journal Personality & Social Psychology Bulletin found that we reduce our calorie intake around ovulation as a way to slim down to appear more attractive to the mate we have or the one we want to have. (full text) And, proving that estrogen is behind this mate-related crash diet, women in the study who had natural hormone cycles (and, therefore, had high estrogen at ovulation) were more likely to report preferring a lower body weight than women who were taking hormone birth control (and, therefore, had lower estrogen mid-cycle).

Whatever the reason estrogen lowers our appetite, I would say that it’s probably wise to skip the kind of dates with your partner or pals that involve expensive or copious amounts of eating around ovulation and save gastronomical adventures for other phases of your cycle when you’re more likely to want to indulge.

By the way, I would later learn that the reason I had no appetite during my first date was because I was falling in love, which triggers stimulant-like chemicals in the brain that turn off appetite (and totally wreck your sleep). When this happens to you, keep in mind that once you spend more time with your new honey, this stimulating effect eventually wears off and you can scarf your favorite vittles like a champ once again.