Take a look at these paintings: Your reaction to them can reveal a secret about your cycle

Home > hormonology tip  > Take a look at these paintings: Your reaction to them can reveal a secret about your cycle

21 Jan Take a look at these paintings: Your reaction to them can reveal a secret about your cycle 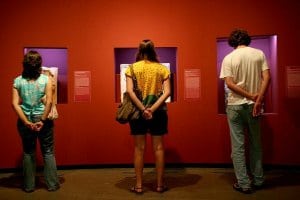 Before I reel you in to today’s Hormonology Tip, I’d like you to take a look at these five paintings by 20th century American artist Georgia O’Keeffe:

Don’t read ahead till you do. You’ll totally ruin it.

Believe it or not, your answer could reveal where you are in your monthly cycle.

Here’s what the researchers discovered:

So, what’s going on?

As the researchers explain it, this is simply part of a biological push from your body and brain to get you in the mood for sex in time for ovulation in the middle of your cycle. The unexpected perk is that art is a lot more interesting to look at on these days.

By contrast, during the second half of your cycle, your libido is naturally lower due to dipping estrogen and testosterone levels and a rise in desire-quashing progesterone. So, you don’t perceive as much sensual imagery–even if it’s fairly blatant.

And women who take hormone birth control don’t experience those peaks and troughs that naturally-cycling women do, landing them in a sort of cycle-long middle-ground between the two.

Okay, so now what can you do with this nugget of cycle info you’ve just learned?

Well, when you notice art seems to be fairly suggestive–or, for that matter, if you notice a TV advertisement, your morning bowl of fruity loops or a college astrophysics textbook seems racier than usual–check where you are in your cycle. It could just be your Week 1 and Week 2 hormones bringing out the saucy side in everything around you.

And, if everyone you know is like, “Wow, does that 50 Shades of Grey movie looks really hot or what?” and you’re like, “Eh,” maybe it’s just because you’re in Week 3 or Week 4 of your cycle when libidinous feelings are low. (Or you’ve seen that Ryan Gosling Dirty Dancing clip and you know what “hot” really is.)