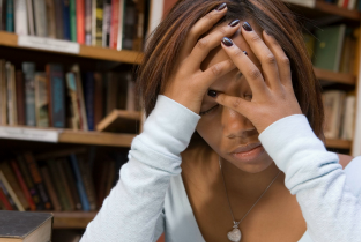 AUGUST 19, 2020—Premenstrual dysphoric disorder (PMDD) affects an estimated 2% to 10% of us who have menstrual cycles, yet sadly it’s still not yet well understood.

What scientists and doctors do know is that PMDD impacts the luteal phase of your cycle–which is the second “half” that starts after ovulation and ends the day before your next period. Symptoms can span this entire time or just part of is, such as the few days before your period. But, they ease up once you get your period–the start of the follicular phase of your cycle.

Symptoms of PMDD can include…

.
But, unlike premenstrual syndrome (PMS), symptoms of PMDD are severe enough to interfere with everyday life, making these cycle days extremely challenging for those who have it.

Scientists aren’t sure what causes PMDD, but suspect it’s due to a sensitivity to fluctuations in estrogen and progesterone that occur during the luteal phase. Research suggests there may be a gene that makes those with PMDD more susceptible to negative side effects of these hormonal ups and downs.

So, when researchers and doctors come up with treatments for PMDD, they try to help patients cope with its symptoms. For example, they recommend lifestyle interventions (such as reducing stress and improving sleep and nutrition) and cognitive behavioral therapy (to learn coping techniques). There are also pharmaceutical interventions to level out moods (such as antidepressants) and “flatten” hormonal highs and lows (such as hormone birth control). And then there are options where you can eliminate troublesome hormones altogether with chemical menopause (drugs that block estrogen production) and surgical menopause (the removal of both ovaries to stop estrogen production), which are typically a last resort since natural estrogen exposure during premenopausal years helps guard the heart, brain, bones and other vital parts of the body during postmenopausal years.

But, what if there’s another reason for PMDD that doesn’t involve sensitivity to your natural hormones? And with it comes a treatment that doesn’t require daily medication? That comes with no side effects? And that puts your PMDD into complete remission? For some, this could be a real possibility…

This surgery cured a woman’s PMDD

In a new case report study (which describes a patient’s unique health condition, treatment and/or outcome), doctors at The University of Texas Health Science Center at Houston shared that after they removed a non-cancerous growth from a 44-year-old woman’s pituitary gland, the PMDD symptoms she’d experienced for 20 years disappeared. But, that’s not what they’d planned on.

So how’d it come about? In 2016, a patient sought out medical help because of milky discharge from her nipples not associated with pregnancy (a condition called galactorrhea). Lab results showed an abnormally high level of prolactin–a hormone made in the pituitary gland that triggers breast milk production. A subsequent MRI scan of her brain revealed a benign tumor on her pituitary–which is a pea-sized structure located behind the bridge of your nose attached to the base of your brain that regulates hormone production among other things.

The patient was given medication–bromocriptine–to normalize her prolactin level. And that was the first hint that her pituitary gland lesion may be playing a part in her PMDD because the doctors noted that…

“The patient’s galactorrhea responded quickly to bromocriptine, and her monthly symptoms were also significantly improved.”

But, then her PMDD symptoms reappeared in 2017. That’s when a second MRI showed the tumor on her pituitary had grown and it was time to remove it surgically. The patient underwent transsphenoidal surgery (TSS) with the goal of confirming that the growth was, indeed, benign and to avoid it pressing on her optic nerves, impairing her vision. However, the doctors reported that something entirely unexpected happened:

“Surprisingly, the patient experienced dramatic improvement in her PMDD-like symptoms after surgery.”

This was a major transformation for this patient since she’d spent the luteal phase of her menstrual cycles experiencing extreme symptoms, including depression, self-harm, high anxiety and suicidal thoughts that disappeared once her period arrived.

To figure out just how long her PMDD symptoms would stay away following her TSS surgery, doctors followed-up with the patient for 28 months and discovered that…

What’s more, in the months where the woman did experience bothersome symptoms, the doctors note that they didn’t appear to have anything to do with her menstrual cycle since they didn’t follow the typical PMDD luteal phase pattern. Instead, the woman experienced short-lived anxiety that she said came from caffeine, watching a scary movie trailer and taking an overnight flight. While the study authors are being a bit conservative by not including those months in their PMDD-free tally, it’s likely that these were PMDD-free as well.

Even so, with the patient now officially PMDD-free for nine consecutive months, with the doctors expecting it to continue, she’s considered to be in complete remission–which is first known case of remission of PMDD symptoms after this type of surgery.

Why did TSS surgery cure her PMDD?

Since eliminating PMDD was an effect that took the doctors by surprise after this patient’s TSS surgery, it will take more than one case study to understand why it worked.

However, the medical team theorizes that it could be that a growth on the pituitary gland creates pressure that blocks neurotransmitters–chemical messengers between brain cells, such as serotonin–from working. This then impacts mood, sleep, pain sensitivity and other issues.

The study authors point out that the pituitary gland changes in size during the menstrual cycle. It enlarges during the luteal phase, so the pressure would be greater on these cycle days, causing PMDD symptoms since neurotransmitters are unable to work as they should.

Then, the pituitary gland shrinks during the follicular phase, relieving the pressure, which means PMDD symptoms would disappear as neurotransmitters work freely again.

Where to go from here

It’s very likely that not everyone who has PMDD also has a growth on their pituitary gland. However, the doctors caring for this patient assert that a pituitary growth as a cause of PMDD is “under-diagnosed and under reported”, so they have this advice:

“We recommend that physicians consider magnetic resonance imaging of the brain in patients with PMS/PMDD.”

What this means for you: If you have PMDD, consider bringing the full print-out of this study (found here) to your physician and ask her or him if you’re a candidate for an MRI.

Get support for your PMDD

If you have premenstrual dysphoric disorder or love someone who does, you can get more information and support from groups that specialize in the condition, such as the International Association for Premenstrual Disorders and Vicious Cycle.