The supplement that can ease PMS and menstrual migraines

Home > anxiety  > The supplement that can ease PMS and menstrual migraines 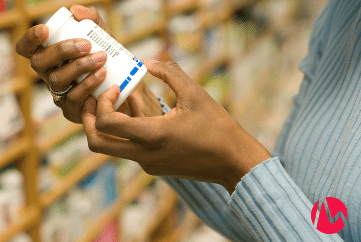 01 Aug The supplement that can ease PMS and menstrual migraines

If you get premenstrual symptoms–such as down moods, anxiety, irritability, sleep problems, breast tenderness and/or aches–or get socked by migraines at certain points in your monthly cycle, you’ll want to know about this new research.

Turns out, a common supplement found in drugstores, health food stores and vitamin stores everywhere can provide significant relief for both premenstrual symptoms and migraines.

What is it? Fish oil! (Scroll down for a fish-free alternative.)

In a new study in the Journal of Psychosomatic Obstetrics & Gynecology, women with monthly premenstrual symptoms who took one gram of fish oil twice daily on the eight days leading up to their period and the first two days of their period experienced a significant decrease in overall symptoms in the first cycle they tried it.

What’s more, when the women took fish oil on the same days in the following two cycles, their symptoms decreased even more.

Women who took a placebo pill also experienced improvements in premenstrual symptoms over the three cycles they took them, however, their changes were less significant compared to the fish oil group.

Fish oil contains two important omega-3 fatty acids–eicosapentaenoic acid (EPA) and docosahexaenoic acid (DHA). These omega-3s have been shown to play important roles in managing mood and sleep by improving brain cell function and helping the brain produce more serotonin, which is lower in your premenstrual week due to plunging estrogen.

They also reduce pain by curbing the production of certain pain-causing chemicals (prostaglandins and leukotrienes).

This study isn’t the first to find a link between premenstrual symptom relief and fish oil. But, it’s important because it does support findings from a 2013 pilot study in the journal Complementary Therapies in Medicine that demonstrates that this readily available over-the-counter supplement has the potential to help ease pre-period woes.

Getting painful migraines is bad enough, but the nausea, dizziness and other side effects from prescription migraine meds can make it feel like you’re swapping one problem for another.

The easy solution: Supplement with one gram of fish oil daily or consume more fatty fish, such as tuna, salmon and sardines.

Research (such as this, this and this) shows that fish oil or including more fatty fish in your diet reduces migraine frequency, duration and intensity as much as the migraine prescription drugs valproic acid and triptans–and without the bothersome side effects.

How fish puts the reins on migraines

Remember those omega-3 fatty acids in fish oil that keep premenstrual symptoms in check–EPA and DHA? Well, the same omega-3s work on key migraine triggers: They reduce inflammation, balance serotonin output and block the production of chemicals that cause pain.

My recent experience with omega-3s

After reading this research, I decided to try omega-3s for my own migraines during this past cycle.

If you’ve been reading my Hormonology posts for awhile, you probably already heard me mention my migraine history: I get’em bad and I get’em a lot! It’s likely because both my parents were migraine sufferers–and migraines are believed to be passed down through genetics, so I’m hit with a double-whammy of migraine genes. Lucky me 🙂

Anyway, I take coenzyme Q10, B vitamins and magnesium to curb my head-pounders since all are study-proven to reduce the frequency and intensity of migraines–and through trial and error, I’ve discovered that this constellation of supplements works for me. In fact, they’ve slashed my migraine frequency by at least 50%. (And, if I don’t take them, I’m quickly reminded of this fact.)

But, hey, I wouldn’t be upset if I found a way to decrease that percentage even more!

So, I tried eating more fatty fish–such as salmon and tuna–which are rich in omega-3s (I prefer to get my omega-3s from food sources) this past cycle in the week leading up to my period and during my period.

And, wouldn’t you know, the only migraine activity I had prior to my period was a short “ocular” migraine that simply impacted my vision–which is actually amazing since I can’t recall the last time I didn’t have a regular ol’ head-throbbing  migraine in my premenstrual week.

And, then, when I was due to have my usual Day 3 “whopper” menstrual migraine, I had a short, mild headache on one side of my head that fizzled out in a few hours. It came back the next day, but quickly fizzled out again.

Normally, I get an intense migraine that lasts three full days–and grows in intensity each day. If you get menstrual migraines, you can probably relate. That’s because research proves migraines during your period are more intense, longer-lasting and more difficult to treat than migraines with other triggers. In short, they suck. And, they suck hard.

So, you can imagine my joy, glee, utter surprise and complete flabbergastness at being let off the hook with just a wee bit of head pain during my period this time around.

Since adding all that fish to my diet was the only change I made, I’m chalking it up to all those helpful omega-3 fatty acids!

Vegetarians, you can do this, too!

Want to try this tip, but don’t eat anything with a face? The research so far has only used fish oil, however you can get the omega-3 fatty acids EPA and DHA in supplements that are derived from plant-based sources, too, which are available in most health food and vitamin stores. One to try: Source Naturals Vegan Omega-3s EPA-DHA from Vitacost.com.

Important: Always consult with your healthcare provider first before starting any new supplement. You can learn more about fish oil here.

Never miss a Hormonology tip!
Subscribe to the free Hormonology newsletter and get helpful tips & the latest research in your inbox:
I could use these tips, sign me up!