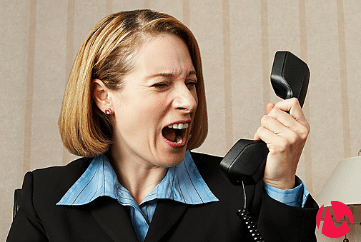 If you’ve never experienced a rise in premenstrual anger, then you’re either lying, you’re a lifelong practitioner of mindfulness meditation or your chamomile tea habit is seriously out of control.

That’s because it’s totally normal to have more anger, irritation and frustration in our premenstrual week. It’s a direct result of plunging levels of estrogen and progesterone, which upsets the balance of mood-managing brain chemicals (such as serotonin and norepinephrine), making us more emotionally sensitive and less patient.

As a result, jerky drivers who suddenly cut us off in traffic, inconsiderate shoppers who elbow their way past us to the sale rack or anyone else who dares to test us during our pre-period days usually gets a verbal smackdown that lets them know they’ve messed with the wrong woman on the wrong  cycle day.

But, what if you need to keep that hot premenstrual temper under control, for example, at work, with your children or anywhere else where verbal smackdowns simply aren’t a good idea?

Talk your way out of an angry mood

An example: Say you just showed up to your favorite restaurant that you were looking forward to for days, but the hostess tells you they lost your reservation and gave away your table–and, sorry, but no other tables are available anytime soon.

Once you feel anger start to rise, reflect on your feelings as if you’re someone else, such as, “Why is Gab ticked off about losing her table?”

Taking this easy step creates emotional distance between you and the problem, which makes you less emotionally reactive.

That’s because it helps you view the issue as if it was happening to someone else, which makes you a bit more rational and gives you more perspective.

For instance, remember the last time your BFF blew up at a waiter over something trivial and you couldn’t understand why she was getting so upset? So, you tried to help her see how small the problem was–and how easy it was to resolve? It’s like that.

Think this sounds just a bit too simple to work?

Listen to this: The study authors examined the brain activity of volunteers who were shown disturbing images designed to provoke negative reactions (such as a man holding a gun to their heads) and discovered that when the participants spoke to themselves in the third person, it decreased activity in parts of the brain governing emotions within one second.

Not much of a self-talker?

I’m a huge fan of talking out loud to myself–I have “board meetings” about projects I’m working on, I tell myself jokes that crack me up and I generally just find myself a great conversationalist. 🙂

However, if you’re not as comfortable with out-loud self-chatter, no worries. The same study found that silently talking to yourself in the third person works just as effectively. It’s not as fun (especially when you do it in stores and restaurants), but it will work just as well.

I hope this little tip helps you the next time your premenstrual ire rises!

Never miss a Hormonology tip!
Subscribe to the free Hormonology newsletter and get helpful tips & the latest research in your inbox:
Can’t wait, sign me up!