The trick I tried to get a happier premenstrual week–that worked!

Home > hormonology tip  > The trick I tried to get a happier premenstrual week–that worked! 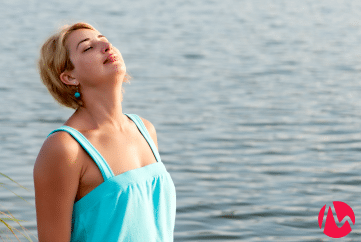 21 Aug The trick I tried to get a happier premenstrual week–that worked!

I was recently happy to report that, based on this new study, I took omega-3 fatty acids two cycles ago to decrease my usual three-day head-throbbing premenstrual migraine. And, it worked–shrinking it to a mere shadow of what it usually is.

Well, I’m thrilled to share that I tried using omega-3s again in this most recent cycle–and it worked even more effectively at keeping a premenstrual migraine at bay. Honestly, where has this tip been all my life?

Because of that success, I want to share with you another tip I’ve tried during the premenstrual week of my past two cycles. It’s a tip to aimed at having happier pre-period days that’s worked for me. Maybe it can help you, too.

Can the grouchies be a craving?

So, I’m not proud to say this, but if I’m being totally honest here, I admit I can be snippy and irritable during my premenstrual week.

And, if I’m being really honest here, sometimes it’s because I give myself a pass to be snippy and irritable. Because, you know, my hormones are plunging, dammit!

But, two cycles ago, I got to wondering if giving myself a pass to be snippy and irritable may actually be making my premenstrual experience worse.

It’s like when you get a premenstrual craving to scarf down a bag of chips followed by pizza followed by cookies topped off with a sundae. You think when you start out that indulging in this craving will make you feel relieved and happy. But, afterward, you’re just left with regret, indigestion and the top button of your pants unable to fasten.

I was coming to the realization that being grouchy during my premenstrual week was like that kind of food craving–and giving in to it was making me feel lousier than not giving in.

So, I felt I needed to try something new: to not give in to the urge to be grouchy, then see what happens.

Starting two cycles ago, I decided that I would adopt a cheery, happy, patient attitude wherever I went. I would remind myself that people weren’t trying to purposely be idiots and dunderheads (okay, most people). And, I tried harder to be more patient, understanding and positive.

Basically, the exact opposite of snippy and irritable.

And, you know what, it really did make me happier. And, it made everyone around me happier, too.

For example, when a woman at the supermarket blocked the aisle with her shopping cart so I couldn’t pass, I just patiently waited. And waited. And waited. I was so close to her that it looked like she was purposely ignoring me, but I reminded myself that most people don’t purposely do irritating things. So, I resisted the urge to “ahem” or cough or just outright say, “WTF, lady!”

Finally, she looked right at me, got startled and apologized, then explained she has cataracts and couldn’t see me from where I was standing. (She really wasn’t ignoring me!) Then, we chatted for a few minutes and it was evident that she was lonely and needed a bit of kind human interaction. We both left that conversation feeling happier.

So, I tried the same thing this most recent cycle–radiate positivity and patience during my premenstrual week. This time, it didn’t start off so well.

I had to visit a local home and garden store to get milkweed plants for a new Monarch caterpillar habitat my husband and I built. It was the middle of the day. It was hot and humid. And, did I mention it was my premenstrual week?

As soon as I parked, the guy parked right next to me pushed his empty trolley right in front of my car. Then, he left it there and got back in his truck and started playing on his phone.

This instantly had me fuming!

First, it was doubly-selfish because he took up a whole parking space with this abandoned trolley that someone else could use to park in. And, he left it right in front of my car–where it could, perhaps, if the wind was right, roll right into it! I mean, could he not see that???

Second, the trolley bay where you return empty trolleys and shopping carts was a mere five feet away from him. He literally could have taken five steps and the trolley would have been in the right place.

With my face beet-red from anger, I stormed out of my car, grabbed his trolley and pushed it around to the driver’s side of his truck, then (okay, I am really not proud of this, but it happened, so…) yelled, “What the blankety-blank is wrong with you? You were clearly able to drag a full trolley all the way to your truck, but you can’t push an empty trolley five feet back to where it belongs? Are you an idiot?” (again, not proud).

I then made a huge show of pushing the trolley back to the return area myself.

As I let go of the trolley, I exclaimed, “Never tick off a premenstrual woman!”

That’s when I caught it–I had given myself a premenstrual pass to be ornery.

And, giving in to the urge to be snippy and irritable had actually made me feel worse, not better.

I needed a fix–fast. So, I used that amazing new study-proven trick that I reported on recently about how to quickly and easily diffuse premenstrual anger by referring to yourself in the third person. So, I asked myself, “Gab, why are you getting angry over this trolley? Does it really matter?” It didn’t.

I took a deep breath to calm down and decided to recalibrate my attitude.

I walked into the home and garden store and was determined to exude patience and positivity.

And, it was like I changed my vibration or something because things got so much easier.

For example, the couple ahead of me was having problems at the cash register and had to have their entire (very large) order redone–while we were all stuck standing and waiting in the outdoor garden area in the blistering heat.

But, I remained patient and upbeat, resisting the urge to complain.

Then, the husband of the couple–an elderly gent with a military cap–and I got into a wonderful conversation about his son who’s in the Navy, making me forget all about the stifling weather. Before I knew it, I was on my way back to my car with new plants for my Monarch caterpillars.

Resist when you can

I’m not so idealistic that I think this premenstrual attitude change can work in every circumstance every cycle. But, I do believe it can help in many cases.

And, I believe it’s because it comes down to the power of “positive psychology”, where you focus on promoting more positivity within, which helps create more positive experiences in the world around you.

That’s why I’m suggesting that you try resisting the urge to give in to the “craving” to be short, curt, irritated or frustrated during your premenstrual week when you can. It could be a key way to enjoy happier pre-period days.

If you try this, please let me know how it works for you!

Never miss a Hormonology tip!
Subscribe to the free Hormonology newsletter and get helpful tips & the latest research in your inbox:
As if I wouldn’t! Sign me up!