Negotiating a salary or price? Keep this in mind…

Home > hormonology tip  > Negotiating a salary or price? Keep this in mind…

08 Jul Negotiating a salary or price? Keep this in mind… 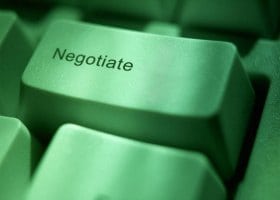 I want to start off today’s Hormonology Tip with a personal story:

Many years ago, I was interviewed for my first job as an editor at a national women’s magazine. I was confident and articulate, and I presented lots of ideas about ways the magazine could be a lot better–with my help, of course.

Suggesting there were things wrong with the magazine–and that needed my fixing–was a bold and, in retrospect, kinda douchey move on my part. (If I had been that interviewer, I would have bounced my arrogant butt right out of there.) However, Bob, the executive editor, was impressed enough to offer me the job on the spot.

Then, came the little matter of salary. He offered a number. I accepted. Bam, just like that–I was hired!

I was elated. I was thrilled. I was officially an editor for a national women’s magazine. I couldn’t be happier!

However, that joy quickly ground to a halt when Bob whispered in my ear as I walked out his office door:

“You know, I would have given you a lot more money if you’d asked for it. Next time, you’ll know to play hardball.”

As his office door closed behind me with a thud, I felt like someone punched me in the gut.

There’s been a debate raging over the past few decades about why women, in general, receive lower salaries than men for the same job. One of the prevailing theories is that we gals simply don’t ask for a bigger salary like guys do.

We’re usually too polite. Or we lack the confidence. Or we don’t feel comfortable taking the risk that many men have no problem taking.

On that memorable day so long ago, I was young and naive. And I wasn’t confident enough to risk losing the opportunity to get my first staff editor job in a bid for higher pay.

Today I know better. I would have gotten that job no matter how much I asked for. We would have just negotiated it down to a number we both agreed on. And I would have ended up with a lot more money in my wallet.

And I know something else, too: When I’m in a position where I’m negotiating something financial–say, when discussing a salary, the price of a car or sale of a house–I not only remember to “play hardball”. I also think about where I am in my monthly cycle.

Because research shows the level of financial risk you’re willing to take can fluctuate based on the week you’re on in your menstrual cycle.

For instance, around ovulation at the end of your Week 2, you become more confident taking risks regarding money, according to a 2013 study in the journal Games and Economic Behavior.

Researchers theorize that during this fertile phase of your cycle, your high hormones are pushing you to go out on a limb as a way to seek out the best partner in time for ovulation. However, this risk-taking effect also happens to impact other non-romantic decisions you’ll be making during your Week 2–like negotiating financial affairs.

Contrast that to the rest of your cycle when you’re actually more willing to lose money than take a risk, the same study shows.

But, perhaps, the week when your confidence in taking financial risks nosedives the most is your Week 3–which starts right after ovulation. Turns out, a rise in progesterone saps your competitive drive and willingness to “play hardball” more in this week than during any other week in your cycle, reports a 2012 study in the Journal of Economic Behavior & Organization.

So, what can you do with this information?

The next time you’re negotiating a financial matter–be it a job salary or price of car–remember that for most of your cycle (especially during your Week 3), you tend to rein in your ability to play hardball a bit more than you probably should. And, perhaps, it would be wise to try a more risk-taking approach, such as asking for a far higher salary or much lower price than you normally would.

Most likely, the worst thing that can happen is your first number is turned down. But, at least you can negotiate from a place that’s closer to where you want to be.