Heading to a destination? Navigate the cycle-syncing way 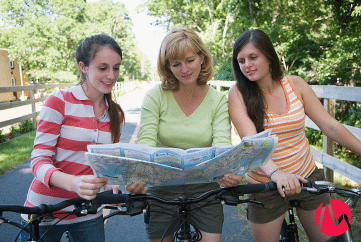 06 Jun Heading to a destination? Navigate the cycle-syncing way

Ever find yourself having to navigate a route somewhere new or get around a detour and are trying to figure out which roads or paths are best to get you to your destination?

Before you plot your course, you may want to consider where you are in your monthly cycle.

Navigation skills vary with your hormones

Turns out, you’re better at two different types of navigation skills during two different parts of your cycle, reveals a new study in the journal Frontiers in Psychology. Here’s how it breaks down:

Week 1 and Week 2: Focus on the direction you’re headed
During the first half of your cycle (from the first day of your period through ovulation), you’re faster at figuring out a route by focusing on the cardinal direction you’ll be traveling (east, west, north or south) and using a map to view the layout of streets or paths to take. In this case, you’re using navigation points that are outside yourself–a technique called “allocentric”.

Week 3 and Week 4: Pinpoint landmarks
During the second half of your cycle (from the day after ovulation through the day before your next period), you’re more accurate at figuring out a route when using personal directions (left, right, up, down) and pinpointing landmarks (such as taking a right at the public library) to figure out the best way to reach your destination. In this case, you’re using navigation points that are related to where you are–a technique called “egocentric”.

By knowing which processing technique works better during each phase of your cycle, you can get to where you want to go faster and with fewer hassles.

Since I’m someone who struggles with a lousy sense of direction and gets accidentally turned around fairly easily (I’ve ended up three towns away heading in the wrong direction before I figured it out), I’ll be definitely using these techniques the next time I’m traveling somewhere new.

Never miss a Hormonology tip!
Subscribe to the free Hormonology newsletter and get helpful tips & the latest research in your inbox:
Sounds awesome, sign me up!