5 scary surprises about your cycle 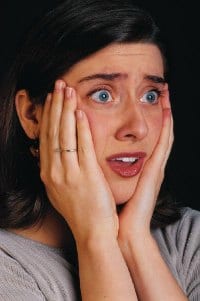 30 Oct 5 scary surprises about your cycle 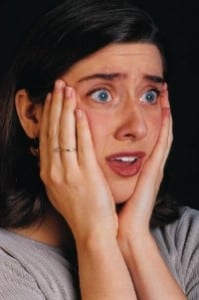 Ready for a Halloween fright? You’ll be chilled to the bone when you find out these 5 scary surprises about your monthly cycle….

1. You spot snakes faster in your premenstrual week! That’s the news from a 2012 study in the journal Scientific Reports that found plunging estrogen creates changes in the brain that amp up both anxiety and awareness of your environment, making you better at noticing danger slithering into your path!

2. You’re more easily grossed-out in your Week 3! Seeing eyeballs floating in a punch bowl or a fake bloody hatchet hanging out of someone’s head can make you queasier in the week right after ovulation, reveals a 2010 study in the journal Hormones and Behavior. As the researchers explain, rising progesterone is increasing your sensitivity to revolting images to help you steer clear of potential threats in case you got pregnant during ovulation at the end of Week 2.

3. You get more nightmares in Week 3 and Week 4! If you’re in the second half of your monthly cycle, you may want to think twice before watching The Shining or another really scary fright flick. That’s because you’re more prone to having intense nightmares on these days, according to a 2009 study out of the University of the West of England. One theory why: Your temperature rises slightly after ovulation, which may trigger changes in the brain that prompt the scary nighttime scenarios.

4. Scary experiences stick like glue in Week 3 and Week 4! Another reason you may want to skip watching Friday the 13th and opt for It’s the Great Pumpkin, Charlie Brown instead during the second half of your cycle: According to a 2012 study in the journal Psychoneuroendocrinology, progesterone makes the brain store frightening scenes into your memory banks far longer, making it more difficult to forget about the gory images of the sawing, hacking and bludgeoning you just witnessed. The researcher believe it’s likely this hormone’s way of helping to keep you safe in the future by reminding you of potential threats to steer away from.

5. You get a bigger fright in Week 3! As if you didn’t already have enough reasons to play it safe in your Week 3, a 2013 study in the journal Neurobiology of Learning and Memory shows that during the first half of this week (approximately 16 to 20 days after the onset of your period) the combination of plunging estrogen and rising progesterone makes scary experiences seem scarier than any other time of your cycle!

Follow me
Gabrielle Lichterman
I'm the women's health journalist who pioneered the cycle-syncing and hormone awareness movement in 2005 with my groundbreaking, award-winning book, 28 Days: What Your Cycle Reveals About Your Moods, Health & Potential. I'm also the creator of the popular Hormone Horoscope Apps and Female Forecaster App. I founded Hormonology as a way to continue sharing hormone cycle education around the globe.
Follow me
Latest posts by Gabrielle Lichterman (see all)