Your Ultimate Hormonology Guide to Christmas and New Year’s Eve 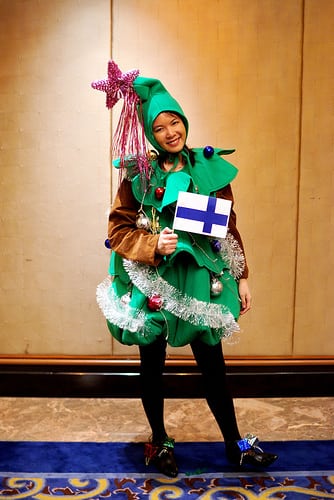 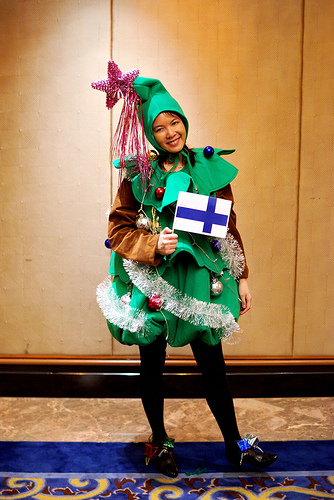 Ready for the Christmas and New Year’s holidays? You can make the festivities more enjoyable by knowing how your hormones will be impacting your mood, energy, patience, chattiness and more.

Read on to find out what to expect from your holiday events based on which week you’re on in your monthly cycle….

Week 1: You’re in the mood to make merry
Day 1 (first day of period) to Day 7
Rising estrogen and testosterone are prompting your brain to churn out loads of feel-good chemicals. As a result, you’re in the mood to have the kind of holiday fun you enjoyed as a kid: You want to sing Christmas songs, decorate and follow all your cherished family traditions to the letter even if it means baking a 20-pound fruitcake that no one eats, braving 20-below weather to go caroling around your neighborhood and suffering bruises while battling post-Christmas Day crowds to get a jump on next year’s Christmas shopping. Christmas Day is particularly magical for you since it conjures up favorite memories from yesteryear. And the extra dose of good will from rising hormones means you can even finally forgive your big brother for spreading that vicious lie about Santa really being your parents. You’ll probably take lots of pictures and post them on every social networking site you can think of despite the many protests of Aunt Sarah who’s convinced that it’s the camera adding an extra 10 pounds, not the Christmas cookies. And, if (okay, when) something goes wrong—for instance, the cat knocks over the Christmas tree or an unexpected guest shows up and you need a present quick—your hormones will have you rolling with the punches and thinking fast on your feet to fix it. For New Year’s Eve, you’re ready with a resolution or two if only to keep with tradition. And you’re equally ready to break them by the first week of January, also in keeping with tradition.
How to make it better: Realize that while you may be feeling jolly, there could be a Grinch or two around you who aren’t in the mood to fa-la-la-la-laaa their way through the holidays. So, don’t let their sour attitude infect your joyous celebrations. Also, if menstrual cramps early in the week threaten to ruin your festivities, beat them into submission with chamomile tea and a heating pad, which relax tense uterine muscles A medicinal snowman-shaped cookie or two wouldn’t hurt, either.

Week 2: You’re the life of the party
Day 8 to ovulation (which is Day 14 in a 28-day cycle)
High estrogen and testosterone are making you energetic, chatty, flirtatious, confident and bold. You’re the one who’s first to turn on the karoake machine at the holiday party and take two, three, even four turns before letting anyone else near the mic, and then the one dragging the shyest person in the room up to the front and forcing him or her to sing. It probably goes without saying that fueling your hormonal fire with holiday cocktails only makes you more audacious. But, no matter how many lampshades you put on your head, folks who give you gifts will adore you. That’s because peaking hormones ups your excitement, making you likely to squeal, jump and do a happy dance over presents as small as an iPod case or regifted T-shirt. When it comes to declaring New Year’s resolutions, people may want to take a seat because you have many. High estrogen and testosterone are making you feel certain that this is the year you’ll drop 40 pounds (in a month), run a marathon (and come in first), become a vegan (right after you finish the turkey on your plate), complete your novel (you have only 256 more pages to go) and save the whales (once you get a warmer parka)! As soon as you shake off your holiday hangover, head to the mall in the morning to take advantage of post-Christmas Day sales. You’ve got the energy, patience and stamina to make it through dozens of bargain bins and clearance racks without breaking a sweat. Fellow shoppers may want to step aside and let you rummage, however—once you spy a deal you want, you may resort to pushing, elbowing or pulling a “Is that Ryan Gosling over by the bras?” distraction ploy to snag it!
How to make it better: Avoid flirting with absolutely everyone you see. Even though high estrogen is making you look and feel more beautiful than any other week of your cycle and high testosterone is revving up your libido to gotta-have-you levels, not everyone (or their significant others) will appreciate your not-so-subtle advances. Also key: Try to keep your inner party girl in check at corporate functions where dancing on the bar or crooning “Crazy For You” to the company CEO could come back to haunt you at your next review.

Week 3: You’re a mellow muncher
Begins day after ovulation and lasts 8 days (which is Day 15 to Day 22 in a 28-day cycle)
Rising progesterone is tiring you out, making you quiet and upping your desire for ooey, gooey, salty, sugary comfort foods. The good news for you is that there always seems to be a plethora of delicious treats to nibble at every holiday gathering. The bad news is that you’re going to be stuck trying to dodge excruciatingly painful small talk with a room full of ex in-laws, annoyingly overachieving cousins and weird Uncle Frank as you try to make it to the buffet table before your favorite mini-quiche are all gobbled up. An important note for Week 3 gals: When you receive gifts, try to pump up your enthusiasm. Progesterone is a sedating hormone, which makes you less likely to smile, gasp, clap your hands and show any other kind of excitement a gifter hopes to see from a giftee. And if you want an equally good or better present next year, you’re definitely going to want to put on a show. While post-Christmas Day sales are tempting, you’ll probably find it hard to muster the motivation to make it out to the stores. If you do go, focus on one or two shops rather than a whole mall since your pep will probably peter out pretty quickly. And, avoid test driving any reclining massage chairs at all costs—your family will be utterly mortified when the security guards have to hoist you out of it at closing time. This is not the week to make New Year’s diet resolutions since progesterone-fueled cravings will have you breaking them faster than a plate of Oreos disappears at a pre-school snack-time.
How to make it better: Your energy is already on the downswing thanks to pep-sapping progesterone, so try to avoid anything else that can make you drowsier, such as alcohol and sitting too close to that one family friend whose boring stories can put even the family dog to sleep.

Week 4: Is it January 2nd yet?
Final 6 days of your cycle
During your premenstrual week, plunging hormones can make you a bit weepy, irritable, sensitive and impatient. That’s because they decrease feel-good brain chemicals that balance out your mood. But, try explaining that to relatives, exes and friends who seem to be on a mission to work your every last nerve with what they think passes as holly jolly merriment, like the hysterical reminiscing about how you accidentally dropped last year’s Christmas turkey on the floor or the 23rd generous offer to set you up on a blind date so you won’t be alone on New Year’s Eve. It’s not that your loved ones have become more grating than usual—it’s just that lower hormones make you see their annoyances more clearly this week than any other week of your cycle. These hormones are also making you a tad less resilient in the face of change or disaster—both of which are in rich supply during the holidays. So, you may get a wee bit frustrated when the cookies burn, the dog poos on the carpet in the middle of your party or your adorable niece vomits a (stolen) plateful of brownies onto your beautifully set dining table. You know, the one adorned with the good china you take out only once a year at Christmas. After you recuperate from the holiday (with wine, unburned cookies and/or copious amounts of sleep), you may be tempted to check out post-Christmas Day bargains. However, you’re better off sticking to online deals instead of heading to crowded stores where an elbowing, shouting, toe-stomping mass awaits to spark a premenstrual bad mood. As for New Year’s, you’ll likely skip resolutions this year since you’re (probably quite rightly) convinced that no one makes it past the first week of January anyway.
How to make it better: Buy yourself the one gift you really want this year. This way, when you don’t get it from anyone else, it won’t spark a premenstrual temper flare that rivals whatever Kim Jong-un can dream up. And, if by chance, someone does treat you to that special something, now you’ll have two. Score!