Does the moon affect your menstrual cycle?

Home > hormone research  > Does the moon affect your menstrual cycle? 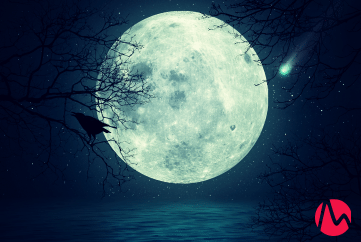 14 May Does the moon affect your menstrual cycle?

Chances are, at some point, you’ve heard that menstrual cycles are somehow tied to cycles of the moon.

Of course, as you probably know–primarily from teen werewolf movies–people have long speculated that the changing phases of the moon have an effect on other aspects of human health and behavior, too.

For instance, past research suggests that the full moon may be linked to an increase in unexplained strokes, gastrointestinal bleeding and seizures.

However, the link between the moon and humans isn’t exactly clear-cut.

In one recent study, researchers found that on nights when the moon is full, we sleep 20 fewer minutes….only for these results to be completely contradicted by a later study that shows the moon doesn’t affect our sleeping habits at all.

But, perhaps the most surprising revelation to come out of moon research is that, according to the majority of the studies, folks don’t get any crazier around the full moon–despite the many books and movies attesting to it.

Anyway, what about the link between a woman’s menstrual cycle and the lunar cycle? I mean, that’s why we’re all still reading this post, right?

Well, let’s start off with a bit of backstory: For generations, a woman’s monthly cycle has been tied to the moon cycle likely because they’re about the same length–with a “typical” menstrual cycle lasting 28 days and a lunar cycle lasting 29.5 days.

In addition, folklore often suggests that women are more likely to be fertile around the full moon–possibly because the fullness of the moon makes people think of fertility and pregnancy while the darkness of the new moon makes people think of emptiness. Or it may be tied to the idea that farmers who sowed seeds around the full moon had a better harvest.

So, over the years, scientists–a naturally curious bunch–set out to see if there is any true link. And what did they find?

A 1986 study and a 1980 study actually did find that a woman’s menstrual cycle was likely to be in sync with the moon’s phases.

But, don’t go planning a full moon party just yet.

So, which study was correct? Maybe neither. A 2013 study in the journal Endocrine Regulations that monitored 74 women’s cycles for a full year found no correlation between the menstrual cycle and moon phases. Any link we find can be chalked up to pure coincidence.

Think this is the end of the moon-and-menstrual-link story? Not so fast….

An interesting 1990 study in the journal Psychiatry Research found that bright light at night can help regulate the menstrual cycle. In the study, women with abnormally long cycles of about 45 days who slept with a 100-watt bulb turned on at night in their bedroom from Day 13 to Day 17 of their cycle successfully shortened their cycles to about 33 days.

This hints that before electricity and the light bulb, shifts in the amount of light at night during the moon’s various phases could possibly have played a significant role in our menstrual cycle–maybe by affecting certain body processes impacted by light exposure, such as the production of the hormone melatonin, prompting all that folklore tying our menstrual cycle to the moon cycle.

What do you think? Have you noticed any link between your menstrual cycle and the phases of the moon?

Never miss a Hormonology tip!
Subscribe to the free Hormonology newsletter and get helpful tips & the latest research in your inbox:
Can’t wait to find out more–sign me up!