The shape of your face reveals something surprising about you 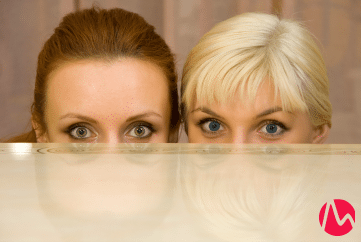 Take a look in a mirror or peek at your social media profile photo: Does your face appear short and wide or long and narrow?

The answer may reveal something surprising about you!

Turns out, having a shorter, wider face indicates a higher sex drive than having a longer, narrower face, according to a new study in the journal Archives of Sexual Behavior. (press release)

The researchers say the reason may be that you were exposed to a higher level of testosterone during gestation, which helped form your physical appearance and other traits, such as sex drive.

Testosterone is known as a key hormone that impacts libido in both women and men.

And, speaking of men, this study found that males with shorter, wider faces also have a higher sex drive compared to men with longer, narrower faces.

In addition, wide-faced guys are more likely to be open and experimental in the bedroom as well as more prone to casual sex over commitments.

How can you use this information?

If I’m being perfectly honest here, don’t take the results of this study too seriously. I enjoy reporting on this kind of research because it’s fascinating. But, I’m also not a fan of making broad generalizations about anyone based on one specific trait. People defy generalizations all the time and certainly other factors eclipse sex drive, such as stress or fatigue.

So, if your face doesn’t match up to the study results, don’t lose sleep over it.

That said, if you’re in a pinch and need to sum up someone else’s sex drive fast (say, you’re at a speed dating event) because you want to figure out if that person has the potential to be a compatible romantic partner, then determining her or his sex drive based on face shape could be one of the tools you use.

Even though testosterone is produced at a steady level in women throughout most of our cycle–aside from a small bump at ovulation–as estrogen rises, it actually helps our body use more testosterone. This means the higher estrogen climbs throughout our Week 1 and Week 2, the more of testosterone’s effects we feel, such as increasing libido, ambition and competitiveness. This is why we have many more high sex drive days during our cycle than just during ovulation!

Never miss a Hormonology tip!
Subscribe to the free Hormonology newsletter and get helpful tips & the latest research in your inbox:
Can’t wait another second, sign me up!