Masking emotions is more difficult on these cycle days 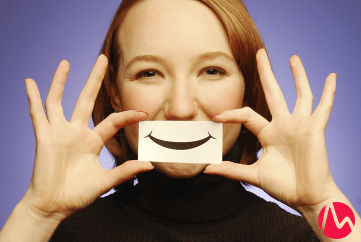 08 Aug Masking emotions is more difficult on these cycle days

Take a moment to think about what you do when you see something disturbing, say, watching a gruesome murder scene on the news or witnessing your boss with serious anger management issues chew out your co-worker in front of the whole office.

If you’re the type of woman to hold in your feelings and put on a mask that doesn’t reveal your emotions to those around you–or you know a cycling woman who does this–you need to hear about this new research.

Masking emotions in your menstrual cycle

According to a 2017 study in the journal Cognitive, Affective & Behavioral Neuroscience, during the second half of your monthly cycle (your Week 3 and Week 4, which spans from the day after ovulation through the day before your next period), not only does it take more effort to keep a stiff upper lip when faced with an unsettling scene, doing so actually makes you feel worse, putting you at a higher risk of anxiety or depression.

This is especially important information to know since research shows that during the second half of your cycle, you experience more intense emotions in response to disturbing scenes and you also happen to spot unsettling scenes faster, for example, a dead animal lying in the road after having been run over.

These are side effects of higher levels of progesterone, which is a hormone that wants to help keep you safe in case you got pregnant during ovulation–and a couple of ways it does this are by helping you notice potentially dangerous problems faster and making you more afraid of them.

They then showed these women disturbing images. Like really disturbing. We’re talking animal and human mutilation, injury, assaults and death. Not easy stuff to stomach.

But, before they showed the images to these women, they asked them to use two different coping mechanisms while watching the pictures:

Reappraisal: This is where you try to distance yourself from what you’re seeing so it feels less emotional, for instance, you might say to yourself, “This isn’t real.” Or, you might try to think of ways the image isn’t relevant to you, for example, because the situation is happening far away or there’s nothing you can do to help it. Or, you can try to imagine that you’re viewing the scene as if you’re someone else, for example, watching it like an objective reporter.

Suppression: This is where you still feel all the emotions you have about what you’re watching, but you don’t change your facial expression. You simply hide what you’re feeling in a way that makes others unaware of your thoughts.

Using electroencephalogram (EEG) tests that measure brain activity, the researchers found that during the luteal phase, not only was the suppression tactic more difficult to do, it resulted in more activity in areas of the brain associated with negative emotions–which impairs mood and ups the likelihood of churning over the images, making them more difficult to let go of.

By comparison, the reappraisal technique was easier to use and resulted in less activity in areas of areas of the brain associated with negative emotions–which would enable women to get over what they saw more quickly.

And, in surveys, the women using reported feeling less distressed when using this coping tactic.

Better coping mechanisms throughout your cycle

In today’s culture, maintaining our composure and keeping our cool when upsetting things are happening around us at home, in business and other areas of life is valued over giving in to our emotions.

In some cases this makes sense. Just imagine what would happen if you revealed your true feelings about that hot-headed boss yelling at your co-worker. Things would not end well and you’d probably be looking for a new job.

And, sometimes, it’s an absolute must to avoid letting your emotions show, for example, when your child accidentally slices open her hand with a kitchen knife and blood is pouring out everywhere.

But, there are healthier ways to deal with these unsettling incidents than merely hiding how you feel.

This study examined one common technique, reappraisal, which helps you get emotional distance from the situation, which reduces the intensity of the emotions you’re experiencing.

Other proven tactics include:

Humor: If you can, make light of the situation. For example, think about the doozy of a drink you’ll be treating that berated co-worker to after the workday is over. This diffuses the emotional intensity and helps you focus on something positive.

Acceptance: This involves acknowledging your thoughts and emotions, and then accepting that they’re part of the process of dealing with the circumstances without judging them. Folks who follow this tactic have lower emotional arousal, which helps them get past the problem faster. You can get help honing this technique by practicing mindfulness meditation, which you can learn at local meditation groups or with online instruction.

Masking your feelings isn’t healthy on any cycle day–but, it’s now proven to lead to worse feelings when you do it during the second half of your cycle.

Instead, when you can’t let your emotions show, try to use positive coping tactics that lessen the emotional intensity you’re experiencing and help you move on from the incident.

Never miss a Hormonology tip!
Subscribe to the free Hormonology newsletter and get helpful tips & the latest research in your inbox:
Why wouldn’t I? Sign me up!