Home > health  > Are you ignoring this important cycle sign? 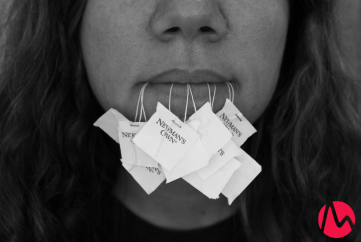 For the past couple of months, I’ve been drinking waaay too much caffeinated black tea. Somehow I went from two to three cups a day to 10. And, some of those cups had two teabags.

While tea is healthy in moderate amounts, as a health journalist who reads medical studies day in and day out, I’m aware that too much tea daily can actually be harmful.

But, it took waking up in the middle of the night–every night–with caffeine headaches and needing to drink tea to make them go away so I could get back to sleep to realize me and caffeine needed to break up for good.

I’m sharing this story with you because the result of quitting tea gave me a big “a-ha!” moment about my monthly cycle–and it’s something I think you need to know about for your own cycle, too.

First, I’ll explain how I quit caffeine in sync with my hormones to make it easier–in case you ever need to use this tactic, too.

Then, I’ll get to the a-ha moment that’s so important for all of us to keep in mind….

Quitting according to my cycle

Like everything I do, I timed quitting caffeine with my cycle. I couldn’t quit cold turkey because it would have triggered the mother of all migraines that lasted for days, which would have had me running back to caffeine again.

So, I decided to taper, cutting back how much I drank each day.

If you’ve got an addiction you need to quit, too, then this is how I recommend syncing it with your hormones:

Research shows that withdrawal symptoms from caffeine, nicotine and other addictive substances are less severe in most of the first half of your cycle (from a few days after your period starts through ovulation) thanks to rising estrogen.

However, it’s important to remember that if you do slip up and imbibe in whatever you’re trying to quit, the same rising estrogen on these days can spur a bigger euphoric rush from the substance–so it can feel more challenging to have to give that up again.

So, when tapering during the first half of my cycle, I focused on cutting back as much as I comfortably could. And, I resisted urges to give in to the temptation to have more, which I knew would set me back by making it more difficult to taper down again.

Research shows that withdrawal symptoms to addictive substances are more intense in the second half of your cycle (the day after ovulation through the day before your next period) due to lower levels of estrogen.

For this reason, I tapered steadily, but more slowly.

Also on these days, you can experience more cravings for the substance you’re quitting as a way to deal with down moods or lack of energy.

With this in mind, I kept alternative mood- and energy-boosters on hand to prevent myself from jumping back into my tea habit.

Within five weeks–a little over one cycle–I went from 10 cups of tea daily to none. So, I’m proof this works!

I had started drinking caffeinated tea awhile ago as a way to boost my energy during very full, long days. And, since it seemed to help a little, I figured more would help a lot.

However, for the past few months I’ve noticed that even on my Week 2 days when high estrogen was supposed to be making my energy soar, I was feeling pretty petered out. Even after a good night’s sleep. And, even after 10 cups of tea.

I chalked this up to aging. After all, I’m about to turn 47–staring down the barrel of the big 5-0–so I assumed being officially “middle-aged” meant constant tiredness was just my new jam.

So, it was funny when my husband, Douglas, said to me the other day, “You’ve stopped saying, ‘I’m sooo tired’ all the time. Have you done something different?”

You ever have someone say something to you that just stops you in dead your tracks?

That’s what I did when Douglas said that.

I realized he was right–I did have more energy. Lots more!

And now my Week 2 days are super-charged. No more lulls. No more needing naps.

I wasn’t geriatric, after all. I was just addicted to caffeine!

This realization made me remember this study that came out in 2010 that pointed out how caffeine is really an illusion: Sure, it perks you up if you don’t drink it all the time. But, for daily drinkers, it just brings you back to “normal”. And between “normal” is a fatiguing, lethargic, head-throbbing withdrawal state.

Thing is, the sign was there: I knew that something was a little off in my Week 2s lately because my energy wasn’t peaking.

But, I ignored this cycle sign. I dismissed the new onset of constant fatigue as a natural part of aging.

But, I shouldn’t have ignored it. I should have used that sign as a starting point to figure out why I wasn’t getting lift-off in my Week 2s.

Now I know better: The next time something doesn’t align with how my hormones are supposed to be making me feel, I won’t ignore it. I will investigate–is it a dietary issue, sleep, a health problem?

This way, I’m not stuck dealing with a problem that could have gotten resolved long ago.

How you can use what I learned

There are so many free tools at MyHormonology.com

to find out how your hormones impact your moods, health and behavior. (The free Hormonology Guides are among my favorites.)

Use these as a baseline to know what you should be expecting from your hormones every week of your cycle.

Then, if you’re experiencing something that’s out of line with what you were expecting–maybe you don’t get happier in your Week 2 when high estrogen is supposed to be boosting mood or you’re frequently irritable in your Week 3 when rising progesterone is supposed to be mellowing you out–you know it’s time to investigate.

Don’t do what I did and wait months. Start trying to pinpoint the problem right away.

By doing so, you’ll have a happier, healthier and way, way, wayyy more energetic cycle.

Never miss a Hormonology tip!
Subscribe to the free Hormonology newsletter and get helpful tips & the latest research in your inbox:
What do I have to lose? Sign me up!