Careful! Cycle days when these injuries are more common 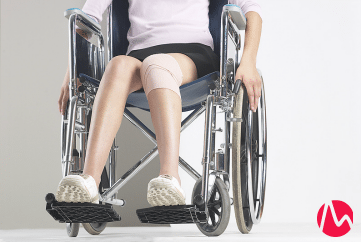 17 Aug Careful! Cycle days when these injuries are more common

On my best days, I’m still clumsier than most folks, so I’m always looking for ways to minimize trips, falls, strains, bumps and bangs.

So, I think it’s great that researchers have discovered key times in our monthly cycle when we’re more prone to certain injuries. This way, I know when to be even more careful.

If you want help minimizing your own ouchies, then read on for the injuries that are more common on certain cycle days….

Spraining your ankle may not be as serious as a broken bone, but, man, it hurts! And, that kind of pain just lingers–and without a cast, no one is going to give you the kind sympathy you truly deserve.

So, if you want to avoid ankle pain, then circle the ovulation phase of your cycle (the last two days of your Week 2 and first day of your Week 3) in your menstrual cycle calendar, then be sure to wear supportive, stable footwear and tread more carefully.

Research shows that during ovulation, peaking estrogen loosens the ligaments and muscles that keep your ankle stable and increases “postural sway”–a slight shifting in motion that helps you stay balanced–making it easier to roll your ankle, resulting in injury.

Try to don a new pair of stiletto pumps or play a pick-up game of basketball in low-cut tennis shoes on these days in your cycle and you’re just asking for trouble.

Dodge knee pain during your Week 2

Say “torn ACL” to any female athlete and she’ll likely wince just at the thought. Heck, she just might run away in fright. (But, hopefully, she’s running carefully so she avoids a torn ACL!)

This painful rupture of the anterior cruciate ligament can happen to any woman, but occurs more frequently in those who are active in athletics. That’s because the tear of this band of tissue that connects and supports the knee is caused by sudden twists, jerks and jumps, which are common in highly physical activities.

For decades, doctors and researchers have known that women are more likely to suffer a torn ACL than men–and for about the same length of time, they’ve gone back and forth about why.

After much examination, they agreed that one key reason for the difference is the estrogen in our monthly cycle. They realized that this hormone was prompting changes in the tissue surrounding and stabilizing the knee, making us more vulnerable to these agonizing tears.

Unfortunately, they couldn’t agree on when estrogen was triggering this vulnerability.

Some studies showed that women are more likely to tear their ACL on the days leading up to and including ovulation.

Other studies suggested our risk is higher after ovulation.

Well, after analyzing the research available on this topic, two new studies (this one and this one) have concluded that women are at greater risk of a torn ACL is greater in Week 2 of your cycle–the days leading up to and including ovulation.

They found that on these days, a rapid rise in estrogen makes the tissue supporting the knee more flexible–which can mean you can inadvertently end up pushing your knee past its usual limits, causing a rip in the structures supporting it.

So try to keep this tidbit in mind when you’re being active during your Week 2.

Though, I admit this still may not help reduce your chances of an ACL injury. That’s because your Week 2 also happens to be the time in your cycle when high estrogen is revving your energy, competitiveness and desire to take risks to cycle-long highs. Not exactly the kind of recipe for playing it safe and being cautious. But, hey, at least now you know why you landed in the doctor’s office.

Sidestep bruises and bumps in your premenstrual week

I don’t know about you, but there is rarely a premenstrual week that goes by without me slamming some body part into a very immobile wall or pointy piece of furniture.

The problem is that dexterity and coordination dip in this pre-period week due to plunging estrogen. But, why?

1. You get dizzier. Research shows that during your premenstrual week, your inner ear undergoes certain changes that can make it more difficult to maintain balance. As a result, you can get hit with dizzy spells or vertigo.

2. You see more slowly. Ever notice how the eyes of someone who’s drunk move slower. Like their head moves, then their eyes catch up a little later? Well, a less pronounced version of this can happen during the second half of your cycle, making you notice that curb, open cabinet door and low-hanging tree branch just a little too late to miss them, according to research (such as this and this). Blame goes to the sedating effects of progesterone and lousier sleep you get during your premenstrual phase.

So, what’s a premenstrual gal to do? Simply knowing that you could be a little off your game can help you overcome these challenges. That’s because you can remind yourself to pay more attention to avoid mishaps and stumbles.

Plus, you can avoid putting yourself in situations that would raise your risk of injury, for instance, by closing all upper kitchen cabinet doors before you bend down to retrieve something off the floor and saving the fire baton juggling for another cycle day.

Never miss a Hormonology tip!
Subscribe to the free Hormonology newsletter and get helpful tips & the latest research in your inbox:
How have I lived this long without it? Sign me up!