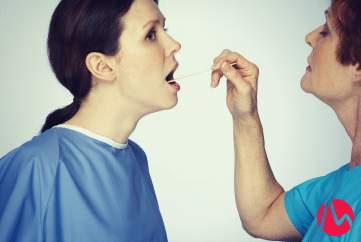 Ever get the urge to cough after eating spicy food, using a cleaning product, cheering on your favorite team or simply talking? Next time it happens, take a look at the calendar to find out where you are in your menstrual cycle. Turns out, your hormones could be the culprit.

That’s the word from a 2018 study in the journal Respiratory Physiology & Neurobiology that found cycling women are more likely to experience the urge to cough (meaning to satisfy a tickle rather than needing to clear the throat of phlegm) in the second half of their cycle–the two weeks leading up to their period.

What’s behind this cycle-related coughing urge? The study authors believe that low estrogen combined with higher progesterone on these days makes nerves in the airway more easily excited by cough triggers, so it takes less to set them off than during the first half of your cycle.

The researchers add that hormones may also play an indirect role in the urge to cough–by leading to acid reflux (heartburn) or fluid retention that then makes throat tissue more sensitive.

If you’re bothered by a frequent urge to cough in the second half of your cycle, keep in mind that your hormones make you more sensitive to cough triggers, which include foods that contain spicy ingredients or cause acid reflux (such as citrus, tomato, alcohol, carbonated drinks, tea and coffee), products that contain intense scents (such as cleansers, room sprays, candles and perfume) and smoke (such as cooking fumes, cigarettes and incense). So, try to avoid these when you can or use a mask, for instance, when using caustic chemicals.

Can’t stop the urge to cough? Try drinking dark cocoa or letting dark chocolate melt in your mouth. Research shows that theobromine, a natural ingredient in cocoa, quiets the urge to cough by blocking the tickle sensation caused by the vagus nerve.

Never miss a Hormonology tip!
Subscribe to the free Hormonology newsletter and get helpful tips & the latest research in your inbox:
Free cycle info? Sign me up!