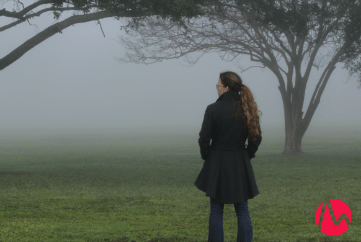 About one day out of the year in December, it gets super-foggy in St. Petersburg, Florida where I live. That annual day of dense fog settled on my town recently–and it had me thinking about the dense fog that regularly and predictably settles in our brain during Week 3 of our monthly cycle (the 8 days following ovulation) as a result of rising progesterone, a sedating hormone.

I’m frequently asked by cycling women for tips for ways to clear away this progesterone-fueled brain fog so they can be more productive and energized during their Week 3.

So, I figured I’d share 7 of my favorite study-proven tips. You can find out about them in my video above or read the tips below:

1. Pair caffeine with a carbohydrate

You likely already know that caffeine can lift your pep, especially when you don’t drink it regularly. In fact, likely only if you don’t drink it regularly. (Research shows that habitual caffeine drinkers feel more alert after downing a cup of tea or coffee because they’re reversing the chronic state of withdrawal that’s actually causing fatigue.)

What you may not have known is that when you pair caffeine with a carbohydrate-rich food, such as whole grain toast, you’ll be improving energy levels even more. That’s because the caffeine is a stimulant and the carbohydrate serves as fuel for the body and brain, so you’re pumping up pep two ways at once. In fact, research (such as this, this and this) shows this combo is used by athletes to help improve their performance and this study found it helped adults multitask more easily.

Keep in mind: This caffeine/carb tip is for short-term results only, for instance, if you need an extra dose of pep for a job interview or big presentation. That’s because both caffeine and carbohydrates trigger quick spikes in energy, but then cause fatiguing crashes later. If you stick to healthy carbs, such as whole grain toast and oatmeal, over unhealthy carbs, such as doughnuts and cookies, you’ll have longer energy and less of a crash, since these kinds of carbs take longer to digest and don’t cause as steep a rise and fall in insulin as sugary foods do.

Here’s one good reason to add orange juice to your daily regimen: One glass of the sweet stuff helps rev alertness all day, according to a study from the UK’s University of Reading. Credit goes to flavonoids in oranges that help improve blood flow to the brain, supplying it with more energizing oxygen and other nutrients. For the biggest energy-lifting effect, opt for o.j. that contains pulp, since you’ll get more flavonoids.

Not a fan of citrus? Blueberries and blueberry juice have been shown to have a similar wake-you-up effect by also supplying the brain with flavonoids, numerous studies conclude (such as this, this and this).

Great news for dark chocolate lovers: Just a little of this delicious indulgence (such as one to two squares of a chocolate bar or one cup of dark cocoa) helps reinvigorate your brain, sharpening memory and improving mental speed, conclude numerous studies (such as this, this and this). Credit mainly goes to cocoa flavanols that help improve blood flow to the brain. However, chocolate also contains the natural mild stimulant theobromine and mood-boosting chemical phenethylamin, which help improve mental alertness, too. There is some caffeine in chocolate, but it’s only a small amount, too little to give it any real credit for chocolate’s invigorating effect.

Feel too groggy to get up and move? Believe it or not, pushing yourself to go for a walk, climb stairs or be active other ways can actually improve your mental and physical energy. The proof? In a University of Georgia study, a group of sleep-deprived women who climbed stairs for 10 minutes at a slow pace experienced a greater surge in mental alertness than women who drank a caffeinated beverage. Why? Stair-climbing–and being active, in general–sends blood to key areas of the brain that wake you up.

If you can, do your exercise outdoors in a park or near other kinds of greenery since breathing in fresh air and being distracted by the beauty of nature help to further invigorate you.

A nap–and sleep, in general–relieves sleep pressure (the urge to sleep) by clearing away the buildup of adenosine, which is a fatiguing compound that builds up in the brain the longer you’re awake. This means you’re basically pressing the reset button on your energy level, giving you a boost that lasts for hours and hours.

Just be sure to keep your nap under 60 minutes. Any longer and you can end up entering deeper stages of sleep, which can make you groggy once you awaken.

Don’t have time to nap? Naps as short as just a few minutes (for instance, during your lunch hour or break) are enough to have an energizing effect, so try to sneak in a quickie!

Popping a stick of gum in your mouth and chewing away has been shown in numerous studies (such as this, this and this) to lead to a modest improvement in mental energy and concentration. It’s believed that the jaw muscles involved in chewing activate areas of the brain involved in alertness. Some research (such as this) suggests that peppermint may have an additionally stimulating effect, but any flavor will help wake you up.

Remember that time a car or bike suddenly cut you off and your heart rate sped up and it felt like you’d downed six cups of coffee all at once and you’d never get to sleep again? That’s a result of a spike in adrenaline–and you can spur that suddenly energizing feeling whenever you need a quick pick-me-up by doing anything that’s a little out of your comfort zone (say, submitting your resume for your dream job or asking someone out on a date), having exhilarating fun (such as playing an action video game or paintball) or being a little naughty (such as pranking a pal). You’ll get a temporary surge in this “fight or flight” hormone that instantly revs your body and brain.

Can’t think of anything super-exciting to rev your pep? Then, simply do something fun, such as a pet project or hobby. A study in the British Journal of Psychology found that simply nixing boredom helps revive you.

Never miss a Hormonology tip!
Subscribe to the free Hormonology newsletter and get helpful tips & the latest research in your inbox:
I live to learn more about my cycle! Sign me up!