Caution: Potential love interests may appear cuter than they really are in your Week 1 and Week 2!

Home > hormonology tip  > Caution: Potential love interests may appear cuter than they really are in your Week 1 and Week 2! 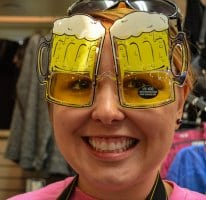 23 Dec Caution: Potential love interests may appear cuter than they really are in your Week 1 and Week 2!

You know that silly phrase “beer goggles”, which refers to how alcohol tends to make potential suitors around you appear better-looking than they really are?

While it’s still up for debate whether or not alcohol really does have this effect, researchers have discovered that your hormones actually do make you see love interests as more attractive on certain days in your monthly cycle.

Specifically, you’re apt to consider a romantic interest’s looks as more appealing during your Week 1 and Week 2 (the first half of your cycle starting with the onset of menstruation and ending with ovulation).

And, you’re more apt to see a potential suitor’s looks as less appealing during your Week 3 or Week 4 (the second half of your cycle, which starts right after ovulation and ends the day before your next period), according to a study out of the University of Wroclaw in Poland.

The researchers theorize that this “hormone goggle” effect is a result of rising estrogen throughout the first half of your cycle, which pushes you to pair up with a cutie in time for ovulation–and one way this hormone does this is by making you see others as hotter to give you that little extra nudge to go for it.

And the researchers believe it’s progesterone that makes you more discerning about a potential partner’s looks in the second half of your cycle. That’s because this hormone prompts you to be more cautious in case you got pregnant during ovulation and now need to be more discriminating about who you choose to get close to.

What’s this mean for you?

If you’re a single lady looking for love who’s in the first half of your cycle, there’s a chance you could make a date with someone new who you might not find particularly attractive once the second half of your cycle rolls around. But, since looks aren’t everything, try to focus on your date’s personality, goals and plans to see if it’s a good match.

And, if you’re a single lady looking for love who’s in the second half of your cycle, there’s a chance you could turn down an offer of a date from someone because their looks don’t measure up. But, underneath that plain exterior could be a heart of gold, so it may be worth giving the person a chance.