Can your menstrual cup dislodge your IUD?

Home > menstruation  > Can your menstrual cup dislodge your IUD? 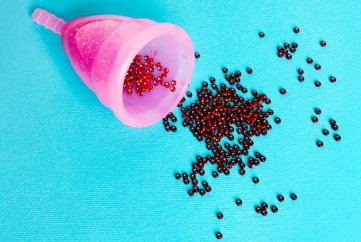 31 Aug Can your menstrual cup dislodge your IUD?

Posted at 17:05h in menstruation, Week 1 by Gabrielle Lichterman
0 Likes

AUGUST 31, 2020—If your method of birth control is a copper intrauterine device (IUD)–a small T-shaped device placed in your uterus–there’s something important you need to know: Women with IUDs who use a menstrual cup have a nearly fourfold increased risk of IUD displacement compared with those who other types of menstrual products, according to a 2020 study of 1,092 women in the journal Obstetrics & Gynecology.1

Specifically, the researchers found that two years after trial enrollment, 17% of cup users experienced IUD expulsion compared with 5% of non-users.

In fact, the study authors were so surprised by how much menstrual cup users were experiencing a displaced IUD, nine months into the study they actually advised the participants to stop using menstrual cups with their IUD altogether.

What’s behind the link?

This study didn’t examine what makes menstrual cups more likely to expel IUDs. However, the researchers found that 30% of menstrual cup users who experienced expulsion said their IUD was dislodged during cup removal.

Because researchers aren’t yet sure what’s behind the link, simply breaking the seal before removing your cup (by inserting your finger into your vaginal canal and wiggling the cup’s rim) or being more careful during removal to avoid catching the string may not be enough to avoid displacement. More research will need to be done to confirm what actually works.

Since proper placement of an IUD is needed for effective birth control, you may want to avoid menstrual cups while using an IUD. If you’re not ready to give up either one, then ask your gynecologist for guidance about better ways to use them together.