Caffeine: How its effects change from week to week

Home > food  > Caffeine: How its effects change from week to week 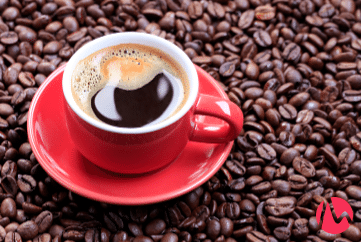 14 Aug Caffeine: How its effects change from week to week

If you’re a woman with a monthly cycle, at least part of the blame goes to your hormones. The ups and downs of your estrogen, testosterone and progesterone can exacerbate or dampen caffeine’s alerting effects.

Curious what you can expect from caffeine from week to week in your cycle? Here’s a quick rundown that’ll explain what’s likely to happen–and why:

It’s no secret that energy can be on the low side at the outset of your period. That’s due to a pep-sapping combination of bottomed-out estrogen and a drop in the energizing mineral iron, which you naturally shed as you bleed during menstruation.

However, day by day, estrogen slowly rises during your Week 1, which helps refill your gas tank. For some women, this estrogen-fueled energy boost kicks in within just a day or so. For others, it can take a bit longer to get up to speed.

To help your pep get a headstart, you might turn to a caffeinated drink–and this would be a fine time to do so. That’s because low-but-rising estrogen can nudge caffeine’s energizing effects along…without pushing it too far over the edge.

But, this license to caffeine-up comes with a key warning: It’s important to drink your coffee, tea or energy drink at least one hour before or after eating iron-rich food or taking an iron supplement. Numerous studies show that these beverages block the absorption of iron (that same mineral needed for energy that you happen to be low on in this cycle week) due to caffeine, polyphenols and tannins.(1)

Your natural energy hits its peak during your Week 2 thanks to estrogen, which rises throughout this cycle phase, and a slight bump in testosterone that you get at the end of this cycle phase.

Add just a little caffeine to this peaking-hormone pep and it could feel like you’ve just powered up with a gallon of rocket fuel, making you more energized, confident, optimistic and ready to juggle a dozen different tasks at once–fully believing you’ll get all of them completed before lunch.

If you’re sensitive to estrogen and/or caffeine’s energizing effects, this power boost could put you a bit on edge–so tread carefully.

If you’re not sensitive, then you may enjoy your caffeine buzz even more thanks to rising estrogen spurring a greater production of feel-good brain chemicals in response to this cinnamon-sprinkled stimulant.

Your energy takes a steep plunge during your Week 3, making you wonder where the heck all that zippiness you were once brimming with in your Week 2 suddenly disappeared to. Why your pep went up in smoke has to do with rising progesterone (a sedating hormone that tires you out) and a dramatic decline in estrogen during the first half of this cycle week. This is one tiring hormonal combo if there ever was one.

And, frankly, caffeine is often no match for it. You could be downing cup after cup of your favorite caffeinated whatever-cino and still find yourself faceplanting right into an unscheduled nap.

To make caffeine work better at keeping you alert–or at least keeping your eyes semi-open–consider drinking your coffee or tea slowly throughout the day. Researchers found that small sips over time block the buildup of the drowsiness-triggering chemical adenosine over the day more effectively than gulping it all at once, so you stay alert longer.

Week 4: “Ack! My heart is beating faster than a Metallica drum solo!”
Final 6 days of your cycle

Energy is on the lowish side during your premenstrual week, but surprisingly research shows you’ll likely find you’re not as zombified as you were during your Week 3. That’s because your progesterone level is dropping–and with less of this fatiguing hormone to weigh you down, you get a bit of a lift.

But, make no mistake: You’re nowhere near the energy highs of your Week 2. That’s because estrogen is also dropping like a rock throughout your premenstrual Week 4–and when that happens, it drags down your body’s level of pep with it.

As a result, you may turn to good ol’ caffeine to give you a kick–even after its disappointing performance during your Week 3.

Unfortunately, caffeine is no friend to a premenstrual gal. Instead, it has the potential to trigger anxiety, antsiness, a pounding heart or an angry, irritated mood.

Why would this close bud turn on you during your time of need? Blame plunging estrogen. When this hormone drops, it can make you more prone to an imbalance in brain chemicals (such as serotonin and noradrenaline) that raises your risk of anxiety symptoms–and ingesting a stimulant like caffeine can amplify this effect.

Caffeine’s negative effects can be even greater when you drink coffee or tea on an empty stomach, so if you’re going to imbibe, do so with a meal.

Also key: Switch to non-caffeinated beverages sooner in your day. One study found that your body metabolizes caffeine slower during your premenstrual phase, causing its effects to linger, which means that 4 pm latte could end up interrupting your sleep many hours later.(2) That’s bad news since plunging estrogen is already known to make you more prone to lousy Zzzzs–which, in turn, leads to a bad premenstrual mood, more achiness and more intense food cravings when you wake up.

So, if you turn to caffeine for an energy boost (or to ward off a caffeine headache if you’re a daily drinker), do so in small amounts, with food and switch off by the early afternoon.

Never miss a Hormonology tip!
Subscribe to the free Hormonology newsletter and get helpful tips & the latest research in your inbox:
Can’t wait–sign me up!