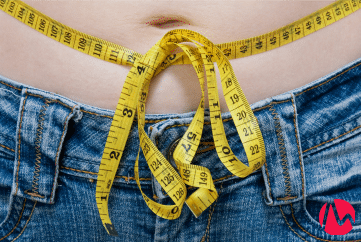 I received a Facebook message from a longtime Hormonology fan asking me to help her with a problem she faces every cycle:

“I gain like 15 POUNDS every cycle now before my period. The weight falls right off after but can you help me stop that from happening?”

She was exaggerating a bit about how much she actually gains. However, I think all of us cycling women can attest it often feels like we’re packing on an extra 15 pounds or so in the two weeks prior to our period.

In reality, research shows we gain just one or two pounds from the day after ovulation through the day before our next period–and many of us gain no extra pounds–yet, we still feel like we’re hauling around an extra 15 because our waistbands get snugger and we get a heavier sensation in our lower abdomen.

The hormone behind heaviness

The culprit behind these uncomfortable pre-period effects is progesterone.

This hormone reaches higher levels throughout the second half of your cycle–and because of this, it triggers an array of changes that make you feel heavier:

Once progesterone drops to lower levels after you get your period, you shed the excess fluid, have a decrease in appetite, experience far fewer salt cravings and release the extra waste your body had been holding onto–all leading to feeling far lighter and your waistband becoming a bit looser.

Since this Hormonology reader wanted help with avoiding this pre-period heaviness issue, I shared a game plan designed to help her reduce this problem caused by progesterone.

I’m sharing it today with you in case you’re bothered by progesterone-fueled heaviness and want to reduce this effect, too:


Magnesium: In a small study in the Journal of Women’s Health, women who took 200 mg. of magnesium daily experienced a reduction in fluid retention and abdominal bloating. Credit goes to this mineral’s ability to balance electrolytes.

This tip requires patience though: You need to take the magnesium supplement every day for two full menstrual cycles (approximately 60 days) to see its effects.

Exercise: Grab your sneakers and get moving. Sweating helps your body get rid of excess fluid it’s holding onto.

Drink water: Many women cut back on beverages during this cycle phase because they assume all that liquid is just going to stick around now that you’re body is retaining fluid. Truth is, however, that drinking more water helps reduce fluid retention by balancing out sodium levels. So, aim for your usual healthy amount, which is roughly eight cups daily, more in hot conditions or if you’re exercising.

2. Curb snack attacks and rein in a larger appetite with protein + carbs, mouthwash and Tetris

If you find yourself snacking on everything in sight (and digging deep into drawers and cupboards to find snacks you can’t see) or you’re piling far more on your plate during the two weeks prior to your period, try this:

Protein + carbs: At every meal, include a protein (such as fish, poultry, beef, beans, tofu or Greek yogurt) and a healthy carbohydrate (such as brown rice, oatmeal or potatoes).

According to registered dietitians Lyssie Lakatos, R.D.N, and Tammy Lakatos Shames, R.D.N., author of The Nutrition Twins Veggie Cure, this combination fills you up faster and keeps you full longer by stabilizing blood sugar. As a result, you eat less and are less tempted to snack.

Rinse with mouthwash: Research proves that denying yourself your favorite chips, cookies and other treats actually leads you to eat more of them because you feel deprived. But, what if you have trouble stopping yourself once you start eating these snacks? Serve yourself a small portion of the food you love, then once you’re finished, rinse your mouth with a minty mouthwash. In a recent study in the journal Appetite, this simple step reduced the amount of snacks volunteers ate.

Why? Mint-flavored mouthwash sweeps away the savory, salty, fatty and sweet flavors on your tongue that keep your appetite revved and replaces it with a minty, fresh taste, which switches off your desire to keep eating.

Play Tetris: In a 2016 study, women experiencing food cravings who played a game that required their full visual attention (such as moving blocks in Tetris or reading clues in a crossword puzzle) had their food desires disappear within three minutes. A game that forces you to look at it blocks your brain from picturing food, so the craving passes. You can play Tetris free at Tetris.com.

The easy solution? When tempted to sprinkle salt on your foods, opt for oregano instead. In a study in the Journal of the American Society of Hypertension, salt lovers who used oregano in their meals ended up preferring foods with less salt, indicating their salt cravings had been reduced.

The researchers suspect it’s because the particular flavor profile of oregano helps fulfill the desire for a salty taste, so you don’t feel the need to load up on the white stuff.

For a bigger salty rush from oregano, use the dried version. This is one of the few culinary herbs whose flavor intensifies in a dried form.

Not an oregano fan? Experiment with other herbs and spices that have a salty taste, such as basil, garlic and turmeric, to find the ones you like.

4. K-O constipation with these 5 easy remedies

Annoying, but true: Progesterone triggers constipation with every cycle. That’s because this hormone slows down digestion as a way to absorb more nutrients from food in case you got pregnant during ovulation and now need vitamins and minerals for two.

But, you don’t have to resort to expensive drugstore treatments to reverse constipation. These five remedies are proven to move things along, too:

Rye bread: A 2010 study in the Journal of Nutrition found that rye bread works more effectively than laxatives and probiotics at relieving constipation thanks to a type of fiber that ferments in the intestine and triggers contractions that make stuck contents move. What’s more, it does the job without cramping or other uncomfortable side effects.
Dried plums: A 2011 study from the University of Iowa Carver College of Medicine shows that Grandma’s tried-and-true constipation remedy–prunes (now known as “dried plums”)–was shown to work more effectively than psyllium-containing fiber additives (like Metamucil and Fiberall) at making you regular again thanks to their sorbitol, a sugar alcohol that has a mild laxative effect.
Sugar-free gum made with xylitol: This is another sugar alcohol that has a mild laxative effect. Plus, the chewing sends signals to your gut to get things moving, which can help push contents through your body faster.


250 mg. of magnesium: One side effect of taking this mineral is that it loosens your stool, which comes in quite handy when progesterone is firming things up.

Self-massage: In a 2015 study out of the University of California, Los Angeles, 72% of folks with constipation who tried perineal self-acupressure–where you gently press and massage the perineum, which is the area between the anus and genitals–whenever you feel the urge to “go” found it helped them achieve success in the bathroom. As the researchers explain it, this simple technique works by breaking up hard stools, relaxing muscles and stimulating nerves responsible for bowel movements.

Important: Talk with your healthcare provider before starting any new supplement. To learn more about magnesium and its interactions with medications you’re taking, conditions you have or surgery, check out the National Institutes of Health fact sheet.

Never miss a Hormonology tip!
Subscribe to the free Hormonology newsletter and get helpful tips & the latest research in your inbox:
I love cycle-related tips, sign me up!