Are hormones to blame for the “man flu”? New research says “YES”!

21 Oct Are hormones to blame for the “man flu”? New research says “YES”! 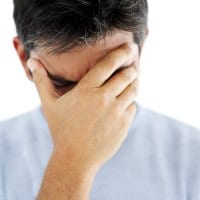 The next time a guy in your life gets the flu or a cold, you may want to show him a bit more pity than you normally would.

Turns out, we gals have it a bit luckier than the lads do when it comes to respiratory illnesses–and it’s all thanks to our estrogen!

According to a new study in the journal Life Sciences, estrogen gives us a stronger immune system than a man’s, especially when it comes to warding off lung infections (such as pneumonia) that can develop as a result of a bout of the flu or a bad cold.

And here’s one more reason to love your estrogen:

Not only is the influenza vaccine generally more effective in women than in men, our bodies are better at fighting off the flu virus if we do end up catching it, reveals a recent study from Stanford University School of Medicine.

In fact, the more “manly” a guy is–for instance, if he’s muscle-bound, has a strong jaw and/or a deep voice, which indicates a higher testosterone level–the less impact the flu vaccine has on him and the sicker he’s likely to get if he catches the flu bug.

As the researchers explain it, testosterone affects certain genes that dampen a man’s immune response. Therefore, the more testosterone he has, the more vulnerable he is to the flu virus and the worse off he is when a virus catches hold.

One theory why the researchers think this occurs: In the early days when men were hunters and faced battle with animals and other people on a regular basis, this dampened immune effect might have helped protect his body from overreacting to cuts, scrapes and other injuries, which could result in an even more harmful condition called sepsis that could lead to death.

A few bonus cold and flu tips for the road:

Even though you’ve just learned your estrogen helps protect your health, obviously you know we gals can still get sick–especially when we’re stressed, not eating right and don’t make time to exercise regularly.

So, here are a few ways to keep cold and flu viruses at bay a little better:

First off, if you’re planning to get your flu shot, aim to get it during Week 2 of your cycle. That’s when high estrogen makes the pain of a shot hurt less compared to other weeks in your cycle. Of course, it won’t make it totally pain-free. But, you’ll be less likely to cuss like a sailor whenever someone accidentally bumps into your flu shot arm.

Another trick that lessens post-prick pain: Press your arm in the area where the shot is headed for 10 seconds right before the needle goes in. One study in the Journal of Clinical Nursing shows this reduces discomfort following a shot.

Love to work out? Then save your running, biking or other exercise for right after your flu shot. Research suggests that a 90-minute post-jab workout can make the vaccine work more effectively throughout flu season.

Want help dodging colds? Then check out this post I wrote in September listing four study-proven natural immune-boosters. Hand to my heart, once I started doing them, I slashed the number of viruses I catch easily by 70%. (Just ask my husband, Douglas, who’s forced to hear me whine and order more tea, soup and crackers from bed every time I get sick.) And I’ve heard from other folks who, like me, tend to catch everything that’s going around–but, not after following these four tips!

Hope you stay healthy during cold and flu season!

And remember to show a guy you know who’s experiencing a bout of the “man flu” a little more love when he starts whining–his testosterone really is making him suffer!