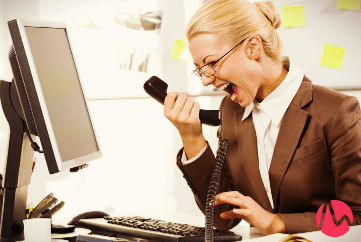 Ever erupt into a giant ball of anger? Like, scream your face off, smash a glass, make the leaves on your plants wither kind of fury?

It happened to me just the other day. I swear, I was convinced if anyone overheard me outside, surely was they were going to call the cops. Thankfully, whoever built my house used LOTS of brick, which is evidently a handy way to muffle blood-curdling screams of rage from the neighbors.

Now, I know we women aren’t supposed to admit to behavior like this lest we’re perceived as emotionally unstable.

And, we’re supposed to admit even less to having it have any connection whatsoever with our monthly cycles lest we reinforce the negative stereotype of the “hormonal” woman.

But, let’s face it–anger happens to almost everyone. And, if you’re a woman with a menstrual cycle, chances are high that it at least occasionally happens to you.

What is it about your cycle that makes you more likely to lose your top? It has to do with hormone fluctuations that trigger certain changes in your brain and body that can cause intense anger and reduce your ability to control your emotions.

The most common time you’ll experience a hormone-related angry outburst is during the second half of your monthly cycle (your Week 3 and Week 4, which spans from the day after ovulation through the day before your next period).

One reason is a steep drop in estrogen during the first half of your Week 3 (the 8 days following ovulation) and again throughout your premenstrual Week 4 (your final 6 cycle days). When estrogen descends, it can upset the balance of mood-stabilizing brain chemicals (most notably serotonin and noradrenaline), which can lead to a shorter fuse.

Another anger culprit during the second half of your cycle is higher progesterone. Progesterone makes many women more sensitive to drops in blood sugar between meals–and one symptom of low blood sugar is sudden intense irritation.

But, a blowout can really happen at any point in your cycle.

Take my recent rager, for example. It happened during the first few days of my Week 1 (period week). Normally, your mood is fairly stable, and even improving, on these cycle days due to rising estrogen. Unfortunately, I had a menstrual migraine–considered the most painful and resistant-to-treatment kind of migraine there is. And, a little-known side effect of migraine is sudden out-of-proportion anger.

You can even lose your cool during your Week 2 (the week leading up to and including ovulation)–a phase in your cycle when high-and-rising estrogen tends to make you happiest. Thing is though, this same high-and-rising estrogen that’s spurring good feelings can actually intensify any emotion you experience because it prompts more arousal in the brain. So, if you find yourself irked by something someone’s done or a situation that’s gone sideways, your risk of hitting the roof can be higher, too.

Another factor that can lead to more anger in your Week 1 and Week 2: Low iron. As you bleed during menstruation in your Week 1, you shed iron. And, if your body’s store of this mineral dips too much, it can create an imbalance in mood-managing brain chemicals, making you more susceptible to anger. Since it can take awhile to fully replenish this mineral through food or supplements, this easily-angered effect can linger into your Week 2.

3 ways to cool off mid-scream

But, if I’m being honest here, once I’ve reached the “screaming absurdities” stage of anger, these rather polite techniques really don’t have much of an effect at bringing me back down to a more coherent level.

Fortunately, researchers have found other ways to rein rage that seem to pack a bigger punch when I turn to them mid-scream. If you need help cooling off in the midst of a meltdown, here are the techniques I recommend trying:

Normally, I would never advocate emotional eating. It’s an unhealthy habit that can lead to weight gain and all its related problems. Plus, sugary foods are obviously unhealthy on their own. However, in this particular instance, consuming a sugar-sweetened food or beverage when volcanic anger erupts is downright medicinal.

Why? According to a 2010 Ohio State University study, reining in a fiery temper requires enormous energy in the brain–and sugar supplies the brain with necessary fuel (in the form of glucose), making it easier for you to bring yourself down a few pegs on the irritability scale.(4)

For fastest results, chug a sugary drink, which enters your bloodstream faster than food.

Sure, it sounds like a silly thing to do–and feels even sillier as you do it–but, hear me out about this one: A 2017 brain scan study in the journal Scientific Reports shows that talking to yourself in the third person reduces activity in a brain area responsible for emotions (amygdala). That’s because it feels like you’re talking to a pal rather than yourself, which helps create mental distance between you and the issue causing your anger. The result? Emotions are less intense, which gives you more control over them.(5)

In a place where you can’t talk to yourself out loud without looking like you need to be carted off by people in white coats? Simply thinking this third-person monologue to yourself works, too.

If you enjoy loud, fast-paced music–such as punk and heavy metal–grab your iPod and turn up your favorite head-banging tunes. A 2015 study in the journal Frontiers in Human Neuroscience shows this will, surprisingly, help reverse your ire and usher in calm.(6)

It seems that extreme music provides a way to express your extreme emotions, which helps release them.

Just keep in mind that this worked for folks who were already fans of this kind of music. If you’re more of a mellow Yanni kind of gal, listening to this racket could make you even more irked.

So, how can you lower your chances of anger rising up in you in the future? Researchers have found a few handy tricks:

Why? Saturated fat inflames mood-regulating areas of the brain, making you more prone to irritability. Unsaturated fat has the opposite effect: It tamps down brain inflammation, keeping irritation in check.

2. Take a multivitamin with minerals

Taking a multivitamin that contains zinc and iron, eating foods fortified with these minerals or getting enough of them through foods can keep a short fuse at bay, according to this and this study.(8, 9)

As you remember from above when we talked about iron loss due to menstruation, iron helps to regulate the production of brain chemicals that manage emotions, such as serotonin. Well, so does zinc. And, even mild shortfalls in these minerals can cause an imbalance that makes you more likely to lose your top.

Do you get frequent bouts of uncontrollable anger primarily during the second half of your cycle? You could have severe premenstrual syndrome or premenstrual dysphoric disorder (PMDD). And there may be one potential way to keep your cycle-related anger under control: Chromium.

In a small 2013 study from the University of North Carolina at Chapel Hill, 11 women with PMDD were given 200 mcg. of chromium twice daily during the second half of their cycle either alone or in conjunction with antidepressants they were already taking.(12)

What the researchers discovered: The chromium on its own provided dramatic relief to premenstrual symptoms including anger. It also improved the performance of antidepressants, resulting in more of an improvement than either the chromium or antidepressants alone.

Why’s it work? Chromium impacts insulin, glucose and serotonin in ways that balance mood and appetite.

The most common side effects experienced by women in this study were vivid dreaming and slight jitteriness similar to drinking coffee. While chromium is safely tolerated in most people, it can have adverse effects if you have diabetes, pre-diabetes, liver or kidney disease or if you are pregnant or are trying to get pregnant. Learn more about chromium here.(13)

Important: Always consult with your healthcare provider before starting a new supplement or treatment.

Never miss a Hormonology tip!
Subscribe to the free Hormonology newsletter and get helpful tips & the latest research in your inbox:
Free cycle info? Yes, please!