9 surprising ways your hormones and sense of smell intersect 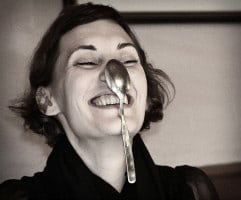 I don’t know about you, but I’m crazy about scents. I’ve got a very sensitive sniffer and can often be found just standing still while I breathe in the many aromas around me. (Which, I have to admit, is a bit more enjoyable to do here in Florida where flowers and grass and fruit trees abound than when I lived in New York City where garbage, urine and tourist upchuck comprised much of the scent tableau.)

Anyway, it probably doesn’t come as much of a surprise to you to hear that I love finding studies that show how our sense of smell is impacted by the ups-and-downs of our monthly hormones.

And researchers have not disappointed! There are quite a few intriguing studies linking scents to our hormones that I think you might find as fascinating as I do.

So, today I’m giving you a fun round-up of research that shows how your hormones and sense of smell can interact in some pretty surprising ways. For instance, did you know….

1. Your sense of smell peaks in your Week 2. As you approach ovulation (in the middle of your cycle), your high estrogen enables you to detect more subtle aromas around you, several studies show, such as this one, this one and this one. This makes it a perfect phase of your cycle to sniff fragrant flowers, try a new essential oil or perfume or cook a meal with a complex aroma.

2. You sniff out fatty foods better in your Week 3. Ever walk into a supermarket or restaurant during your Week 3 (the week after ovulation) and you immediately started craving fatty foods, like doughnuts, French fries, croissants and ice cream? You were probably smelling the scent of fatty foods in the air. That’s the word from a study that found we get better at detecting the aromas of foods high in fat during this phase of our cycle–and this is likely one culprit behind our many cravings for fatty foods on these days. What’s behind this peculiar scent-specific change? Researchers believe it’s due to rising progesterone. This could be one of the various ways this hormone pushes us to consume more calorie-dense food in case we got pregnant during ovulation and are now eating for two.

3. You get a boost in testosterone when you sniff an ovulating woman. Hand to my heart, that’s what the research shows. The theory behind this odd phenomenon? It may be that because we evolved to send out signals during ovulation that let others know we’re fertile, this, in turn, touches off a competition with other gals near us for the best mates with whom to procreate. As a result, our own testosterone levels shoot up to try to muscle our romantic rivals out of the way. This is actually good news if you’re looking for a quick boost in confidence, assertiveness, competitiveness or libido, since testosterone revs all of these traits. Just seek out an ovulating woman and take a big whiff!

4. Men get a testosterone boost when they sniff you during ovulation, too. Who needs expensive perfume when your natural scent during ovulation pushes men into overdrive by ratcheting up their testosterone? This makes perfect evolutionary sense, researchers say: During ovulation, your body sends out signals to males through chemicals in your sweat telling them that you’re fertile. And, their body’s response is to kick testosterone up a notch as a way to increase their desire and prepare to woo you.

6. The scent of a man’s sweat depends on you, not him. When you sniff a sweaty guy, does he smell sweet like vanilla, sour like urine or like nothing at all? Believe it or not, your answer depends largely on you. Researchers discovered that your genes affect how one specific odor receptor in your nose perceives the scent of chemicals caused by hormones in male sweat–and how you perceive it depends on the variation of this gene that you have. (Thankfully, I’m a “vanilla gene” kind of gal. I couldn’t image what it would be like to go through life having to endure a urine odor coming off half the Earth’s perspiring population.)

7. You prefer the scent of men with symmetrical features in your Week 2. Yep, you read that right–men with symmetrical features smell different! At least during the days around ovulation, one study shows. The researchers speculate that because symmetry is a sign of virility and health, this scent cue may help point women toward the best partner with whom to conceive a child during this fertile cycle phase.

8. You get more turned on by fragrances in your Week 1 and most of your Week 2–but not during ovulation. Whether you’re being physically intimate with a partner or you’re flying solo, this study shows you have greater arousal when you smell a pleasant cologne or perfume from the start of your period to the day before you ovulate. But, you experience greater arousal during physical intimacy when you don’t smell a cologne or perfume during ovulation. What gives? The researchers theorize that during the first half of our cycle as estrogen rises, we may be associating the scent of a body fragrance with past intimate experiences or there may be a mechanism in the brain that reacts to fragrances in a way that boosts our physical response, making intimacy more pleasurable. As for why we suddenly prefer an au naturel scent state during ovulation–when estrogen is at its peak–the researchers speculate that, perhaps, because high estrogen during ovulation is giving us a keener sense of smell, the scent of cologne may be too overpowering and, therefore, unpleasant.

9. You can zap PMS symptoms by sniffing lavender. Surprising as it sounds, just 10 minutes of inhaling a lavender essential oil, soy candle or flower (but, not scent-alikes found in some chemical sprays and perfumes) can significantly reduce premenstrual anger, irritability and the blues, research shows. As the researchers explain it, certain compounds in lavender’s aroma are absorbed through membranes in your nasal passages, then travel to the brain where they have a relaxing, mood-lifting effect.